More Than 200,000 Signatures Gathered For Two Ballot Initiatives:
One to Set Safe Patient Limits for Nurses to Protect Patients in Hospitals; and the Other to Ensure Taxpayer Health Care Dollars are Dedicated Exclusively for Patient Care and Needed Services

Petitions with the Signatures have been Submitted to Town Clerks throughout Massachusetts for Certification, Which is the Next Step Towards Placing These Vital Measures on the 2014 Ballot 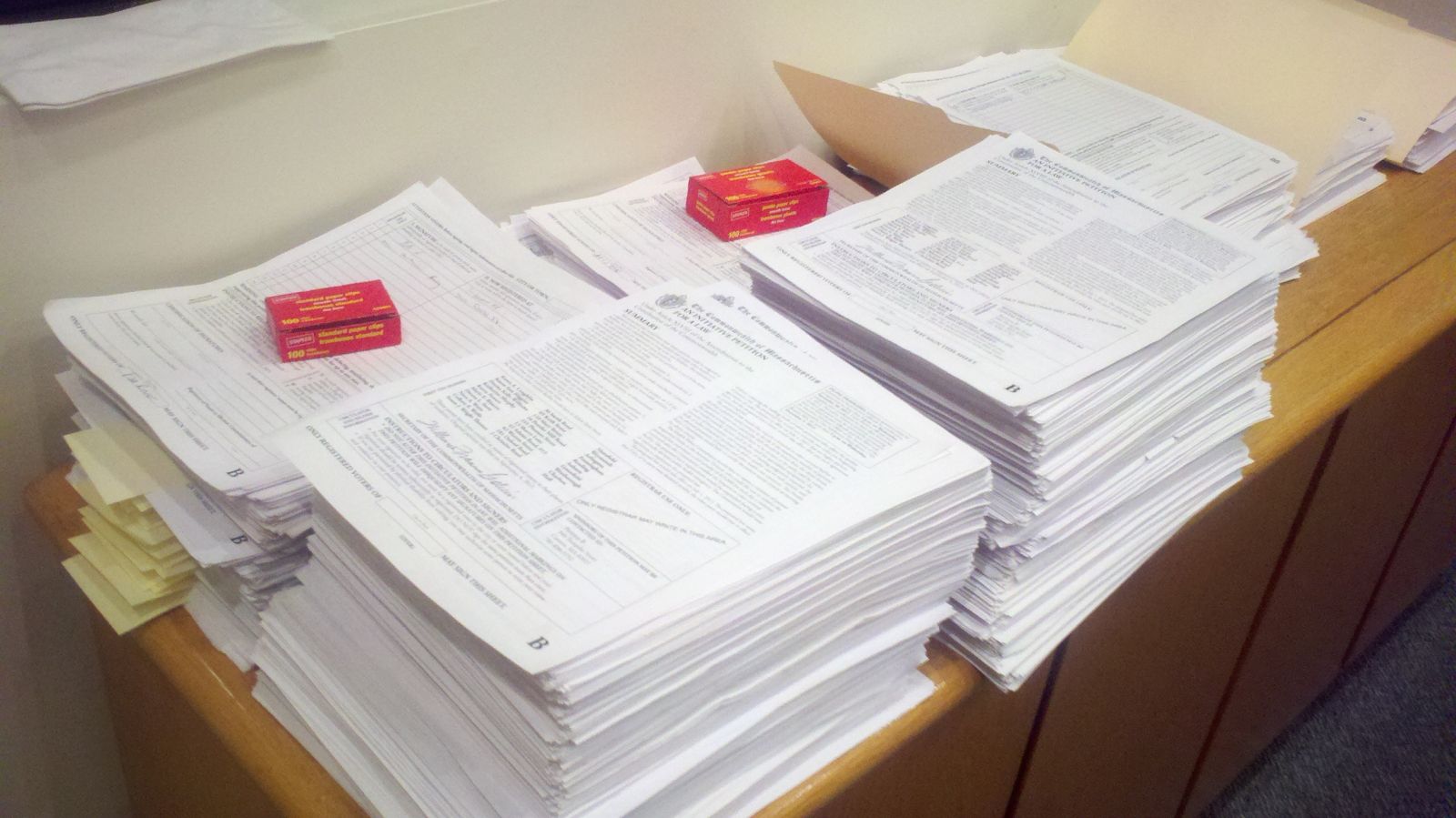 CANTON, Mass. — The Massachusetts Nurses Association/National Nurses United announced today that it has collected and submitted for certification more than 200,000 signatures for two ballot initiatives that will dramatically improve patient safety in Massachusetts hospitals, while also ensuring that taxpayer health care dollars are dedicated exclusively for patient care and needed services for all communities.

The signatures on both measures were gathered by nurses and a number of other supporters from a variety of health care, social justice, labor and senior advocacy groups throughout the Commonwealth, who were out in their communities, at special events, shopping centers and local festivals over a six week period. Both initiatives met with wide acceptance by the public, allowing the MNA/NNU to submit well over the 68,0000 signatures required by law to place each question on the ballot, and to do so well ahead of the Nov. 20 deadline.  Once the town clerks certify the signatures submitted, they will be returned to the MNA/NNU and the organization is then required to deliver those certified signatures to the Secretary of State for final approval by Dec. 5.

“We are thrilled to have gathered so many signatures so quickly, which is a testament to how important the issue of safe patient limits is to the public,” said Donna Kelly-Williams, RN, president of the MNA/NNU. “The public, many of whom have been patients or have had family members who have been patients in our hospitals, have witnessed firsthand how their patient care has suffered in recent years as nurses struggle to cope with unmanageable patient assignments. They have also seen their communities deprived of services as their one time community hospitals have been merged into mega corporate networks where the drive for profits replaces a concern for the needs of patients.”

The Patient Safety Act – Safe Patient Limits Will Save Lives

On Friday, Nov. 8, the MNA/NNU delivered official petitions with more than 110,000 signatures to town clerks throughout the Commonwealth for certification of the Patient Safety Act, a ballot initiative that will set a safe maximum limit on the number of patients assigned to a nurse at one time, while also providing maximum flexibility to hospitals to adjust nurses’ patient assignments based on the specific needs of the patients.

The filing of the initiative follows the release of dozens of prominent research studies and reports that show beyond any doubt the need to set a maximum limit on the number of patients that can be assigned to each registered nurse at one time if we are to avoid -- mistakes, serious complications and preventable readmissions.To view these studies and to learn more about the initiative, visit PatientSafetyAct.com.

“The research is clear and unequivocal, the most important factor contributing to the health and safety of patients while they are in the hospital is the number of patients your nurse is assigned to care for during his or her shift,” explained Donna Kelly-Williams, president of the MNA/NNU and one of the 10 original signers of the petition to establish the ballot initiative. “The fact is patients in our hospitals are at greater risk because they are being forced to share their nurse with too many other patients at the same time.”

“In Massachusetts, there is no law that states the maximum number of patients a nurse can safely care for at any one time, nor is there any requirement for hospitals to adjust their staffing levels based on the actual needs of the patients,” Kelly-Williams explained. “As a result, hospitals are forcing nurses to ration care, placing patients’ health in jeopardy. This ballot measure will ensure patients receive the care they need and deserve, when they need it, preventing thousands of patient complications, saving hundreds of lives, and yes, saving millions of dollars that are being wasted now because patients aren’t receiving adequate, timely care from their nurse.”Under the Patient Safety Act, maximum safe patient limits for nurses will be established for different types of units/departments in a hospital. The proposed law calls for one nurse for every four patients in medical/surgical units, where most patient care takes place. In emergency departments, the proposed regulations require nurses to care for between one and three patients depending on the severity of the patient conditions, and for nurses in critical care units to have between one and a maximum of two patients based on the needs of those patients.

To provide flexibility in staffing and to account for patients who require more care, the bill calls upon a state agency to establish an “acuity” system, which is a tool to measure the illness level; i.e., how sick the patients are on a particular unit. Based on the acuity of the patients assigned to a nurse, the maximum safe patient assignment will be reduced if those patients require more intensive care. Right now, there is no law or regulation that requires hospitals to adjust RN staffing based on patients’ needs, and as a result, most hospitals rarely make such improvements.

On Nov. 8 the MNA/NNU also delivered official petitions with more than 100,000 signatures to town clerks throughout the Commonwealth for certification of the Hospital Profit Transparency and Fairness Act, a ballot initiative that that will require hospitals to be transparent about their financial holdings and other activities, to limit CEO salaries and to limit and claw back excess profits to ensure that taxpayer dollars are dedicated exclusively to safe patient care and necessary services for all communities in the Commonwealth.

This measure has been proposed to respond to dramatic changes within the hospital industry driven by state and national health care reform, including the merger, consolidation and conversion of non-profit hospitals into larger multi-million dollar corporate networks. In 2010, Attorney General Martha Coakley released a report raising concerns about this trend and pinpointing the main driver of the Commonwealth’s increasing health costs – market clout of highest paid providers – at the expense of smaller community hospitals.

“Every hospital, whether it's nonprofit or for profit, gets a substantial amount of money from public funds - i.e., the taxpayers via Medicare and Medicaid - to provide health care for the residents of the Commonwealth, yet there is no way for the public and policy makers to accurately understand how those taxpayer dollars are being allocated,” said Julie Pinkham, RN, executive director of MNA/NNU. “This initiative is needed to ensure that the public and the communities served by these hospitals have a clear picture of the financial health of the hospitals that serve their needs. Furthermore, it will serve to ensure that patients are getting the care they need with the resources that are available to these hospital administrators.”

As an organization, the MNA/NNU, in concert with numerous consumer and health care advocacy groups, has been involved in a number of campaigns over the years to protect services for local communities that are the direct result of this ominous trend. For example:

In each of these instances, health care executives cited the uncertainty surrounding the onset of Obamacare and state health care reform as the driving force behind their decisions, at a time when WBUR recently reported that hospital profits (margins) nearly doubled between 2010 and 2012.

The proposed ballot initiative has four key provisions to address this situation:

"We have created a health care system of haves and have nots in Massachusetts, a system of winners and losers, where the mega health care corporations are the winners and too many patients and too many communities are the losers,” Pinkham said. “The public has a right to know how and where their health care dollars are being invested. Particularly at a time when hospitals are using the current financial climate as an excuse to degrade or limit the care they are providing to vulnerable patients. Our hospitals, no matter who owns them, are a public trust and our safety net, and this initiative is designed to give some long overdue control back to the tax payers and help protect that safety net.”