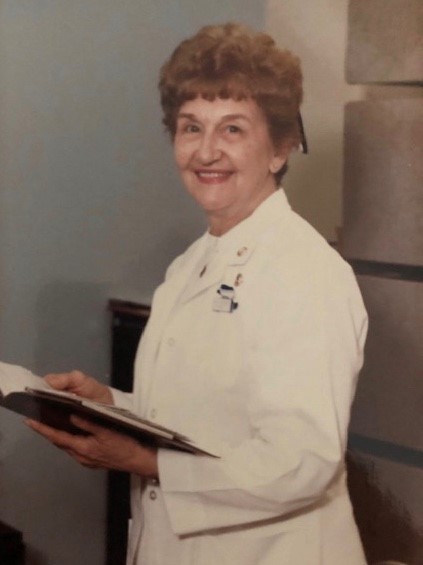 It is with great sadness that we announce the passing of a long time MNA activist and Registered Nurse, Marion Cronin. Marion was 100 years old and a very strong advocate of the nursing profession and the MNA throughout those 100 years. She was a great mentor to many young nurses whose careers she followed even after her retirement from nursing.

Marion Cronin was born in Haverhill on November 23, 1919, the older daughter of Phillip Francis Cronin and Marion Norton Cronin. And the granddaughter of Captain Alaric Norton of Maine, who worked on the wharf in Boston. Along with her younger sister, Evelyn, she grew up in Haverhill and graduated from Haverhill High School in 1937. Then she went on to the Lawrence Memorial Hospital School of Nursing, Medford, graduating in 1941.

Her first nursing job was at the Contagious Hospital on Buttonwoods Avenue. From there, she moved to the Hale Hospital, after taking her state exam and becoming an RN.

After recovering from an illness, she took a year off and, with a friend, drove a trailer down to Miami, Florida where she worked at Mount Sinai Hospital for a couple of years. She returned to Haverhill and to work at the Hale where she stayed for 42 years, starting as a staff nurse, becoming the head nurse of George Ward and later the nursing supervisor of the day shift.

During these years, she kept in touch with her high school friends and traveled extensively, going to England, Ireland, Scotland, to Hawaii and to California several times. She loved reading, animals and live music. One of her cherished birthday gifts was a visit from a favorite musician, who came to her apartment to play for her for her 96th birthday.

In the early 1950’s, she joined the Massachusetts Nurses Association(MNA)and became active(“it seems like all my life”) in many committees and in District 4, Essex County area, eventually serving as its Secretary and President, attending state and national conventions. At that time, the MNA was trying to get a law passed that would allow nurses in public hospitals to form unions and that would require their public employers to bargain with them. Marion was one of the nurses who fought for that goal and, when the bill passed, she watched Governor Endicott Peabody sign that bill into law in 1964. And she remembered, over 40 years later, that he was never nominated for public office again.

For Marion, that law marked the beginning of the next phase of her work. While she continued working as a nurse, she worked to organize the nurses at the Hale. When they voted to become a union with the Massachusetts Nurses Association, she was elected the head of that union. Hale nurses were among the lowest paid in the region, and the nurses were upset about that. As the chair of the union, she rallied the nurses and led the negotiations with the City of Haverhill, keeping the elected nurses committee working hard, and threatening the City and the hospital with mass resignations, before the nurses won their first contract, with a real raise in their wages, in 1967. It was the first time the nurses had a say in their working conditions.

She remained in the leadership of the union until she retired. But even when she was retired, she remained involved in the MNA, keeping track of the changes in nursing and in the on-going unionization of nurses across Massachusetts. She was a feisty, thoughtful woman and a strong nurse leader who mentored countless young nurses.

In the fall of 2012, just before her 93rd birthday, one of the younger nurses she had mentored (Jeanine Hickey), asked if she was willing to be interviewed for a film. With typical Marion openness, she said “sure” and her interview became the centerpiece of the documentary “Playing on Our Sentiments”, the story of the start of the Hale Hospital Nurses Union and winning their first contract. When the documentary was finished in 2015, she attended a screening of the documentary at Haverhill Community Television and answered questions at a panel which followed.

Marion died on Saturday, May 2nd, after celebrating her 100th birthday twice in November 2019 once with her family and close friends and again with nurses she mentored and worked with from Hale Hospital.  Marion said that she had a great life and that nursing and MNA were an important aspect of her career. Her sister, Evelyn Cronin Curry, predeceased her. She is survived by her nephews, John Curry and Phil Curry, her great nephews and her many friends.

We acknowledge Marion’s lifetime commitment to caring. We acknowledge her great contributions to her nursing practice and know that her accomplishments can only be measured in the lives of those she mentored through knowledge, dedication, and caring. Marion, we owe a great debt to you for blazing a trail for all nurses in the Commonwealth to have the right to form a union and to have a voice in their nursing practice.

When she spoke on the phone, she ended with “Bye for now”, because she always intended to speak to you again. “Bye for now”, Marion. We will miss you.