Sends Message to the Industry on Issues of National Concern 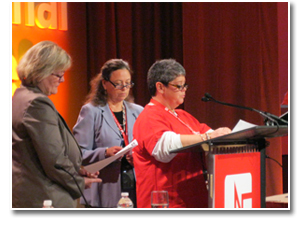 One of the clear messages coming out of the NNU Staff Nurse Assembly was that the CEOs of the health care industry are clearly using the current economic climate as justification for making a concerted assault on nurses’s hard-fought union contract rights and benefits. Across the country, unionized nurses are seeing similar proposals to cut important benefits, strip nurses of their pensions, and take away all kinds of provisions that protect nurses and their patients.  The hospital industry is clearly organizing nationally to wage an assault on the nursing profession, similar to what occurred in the 1990s following the last round of health care reform.

One of the most important benefits of the formation from the NNU is the ability for nurses from across the country to organize themselves to combat the industry’s tactics to share information and strategies, and to stand up together to combat these attempts to dismantle what has taken years to build through the RN union movement.

In response, the NNU Executive Board has drafted a resolution that clearly states important RN union contract standards that nurses will fight to protect in all upcoming contract fights.  This document provides a clear statement of what nurses know is important for the protection of their professional practice, and the quality of their work life. It is meant to serve as a guide for nurses entering contract struggles, and a message to the industry of our “line in the sand,” said Karen Higgins, RN, Co President of the NNU, and an MNA member who participated in drafting the resolution. The resolution passed with a unanimous vote by 1,000 nurses attending the assembly, accompanied by a standing ovation.

Among the nursing practice standards included in the document are a commitment to: