As the Massachusetts Nurse went to press, the nurses and health professionals of Morton Hospital were engaged in a righteous struggle to win a new union contract to protect their professional practice as well as their defined benefit pension plan. The nurses conducted an enormously successful informational picket on March 10, with more than 300 members and supporters walking in front of the hospital protesting the hospital’s refusal to address the nurses’ need to negotiate strong limitations on the use of forced overtime, as well as their unreasonable demands to cut the nurses’ benefits at a time when the hospital was making healthy profits.

The nurses followed the picket with the filing of unfair labor practice charge against the hospital for failure to engage in a good faith effort to reach a settlement. The nurses were also involved in the initial planning for the potential of a vote to authorize a strike, should that become necessary. In early April, following the nurses’ activities, the hospital began to compromise on the issue of mandatory overtime but was holding firm on its plan to cut the nurses pension. 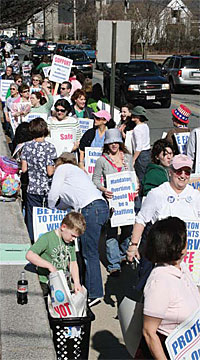 The nurses and health professionals are continuing to negotiate in the hopes that they can avoid a strike, but the issue of preserving their pension is a key issue that needs to be resolved. They continue to engage their community, placing ads in the paper, circulating a community petition, and circulating signs of support to community members and store owners to display.

The plan to cut the nurses’ pension plan, which would result in a 36-50 percent cut to the nurses’ retirement benefit, has outraged the nurses, who have been meeting in recent days to consider their options, including a decision to hold a vote to authorize a strike over this and other outstanding issues, including the hospital’s refusal to agree to strict limits on the use of mandatory overtime as a staffing mechanism and a proposal to increase nurses’ health insurance premiums and co-pays.

The MNA is also considering filing a second charge against the hospital for its failure to present information requested that details specific financial information about the hospital’s spending on executives’ salaries and benefits, the value of its real estate holdings and the salaries and bonuses for physicians at the hospital. The request was driven by earlier disclosures that the hospital is making healthy profits and has awarded its outgoing CEO an astounding $3 million retirement bonus at the same time it is looking to strip its staff of their pension. The nurses are also requesting information on what the hospital is paying for its high priced legal counsel, which the nurses’ union believes could be as much as $500 – $600 per hour. 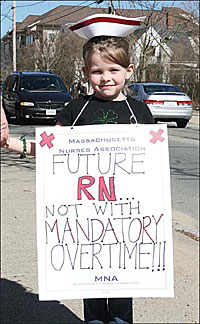 “We have always been willing to make sacrifices on behalf of the hospital when they have been in real financial trouble,” said Joyce Wilkins, RN, chair of the MNA’s local bargaining unit at Morton Hospital. “But this hospital is making millions in profits and is projected to do so for at least the next two years. They are making that money on the backs of nurses and health professionals, who provide 90 percent of the care patients receive. We see no economic justification for the hospital’s decisions to cut our pension, or to use forced overtime as an alternative to providing safe staffing conditions for our patients.”

The 400 nurses and health professionals, who are represented by the MNA, began negotiations for a new contract in October. To date, 18 sessions have been held, with the last four sessions held with a federal mediator. The nurses’ existing contract expired on March 8.

On March 10, union members delivered to management petitions in support of their call for an end to mandatory overtime and protection of their pension, which was signed by more than 85 percent of the professional staff. On March 17, more than 300 union members participated in an informational picket outside the hospital, drawing overwhelming support from the public.

Talks held on March 22 failed to yield a settlement on the key issues in dispute. While the nurses’ union compromised on its proposal regarding mandatory overtime, the hospital made only token moves on the issue, which will allow them to continue to force nurses to work forced overtime without restriction. Contrary to management claims that mandatory overtime is rarely used, the nurses have recorded nearly 100 instances in the last few months where nurses were forced against their will to work extra shifts, a practice that medical experts say is extremely dangerous for patients.

The nurses are seeking to limit the number of hours a nurse can be forced to work to 12, which is the standard recommended by medical experts. They want to limit the number of times a nurse could be mandated to work overtime to two times per calendar quarter. And most important of all, the nurses want to require the hospital to provide full staffing so mandatory overtime isn’t necessary.

“Forced overtime only happens because a hospital does not have the proper number of staff on hand to cover the shifts needed to care for patients,” Wilkins explained. “Our management is regularly posting four-week schedules with dozens of holes in the schedule, holes that can only be filled by nurses working overtime.

If the occurrence of mandatory overtime is as rare as they claim, then they should have no problem accepting our proposal, which would still provide them with hundreds of shifts per quarter to fill unexpected holes in the schedule. The only reason they won’t agree to our proposal is because they want to use mandatory overtime as a staffing tool. “

The parties are set to meet again on March 30, the day prior to the hospital’s threatened deadline to unilaterally freeze the nurses’ pension.

The nurses union has held open meetings and is meeting individually with its membership to provide information about strikes and to answer member’s questions about a potential strike vote, as it continues to evaluate all options to reach a settlement.

“None of us want a strike. We want a good faith negotiation for a fair settlement,” said Wilkins. “But we are committed to using our legal rights, including a strike, if our members determine that is what is necessary to protect our patients’ best interests as well as the interests of the caregivers.”