A Haiti earthquake victim gets a chance to walk again

A Haiti earthquake victim gets a chance to walk again 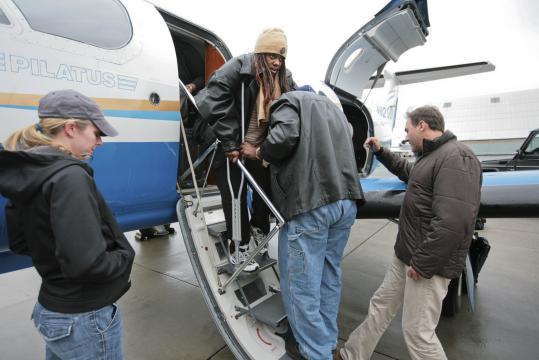 Nerlin Cajuste was greeted by Dr. Robert McLaughlin at Hanscom Field on Wednesday. (Aram Boghosian for The Boston Globe)
By Brian R. Ballou
Globe Staff / April 2, 2010
Sitting on the patio outside her second-story apartment in Port-au-Prince, Haiti, on the afternoon of Jan. 12, Nerlin Cajuste was about to take a bite of scrambled eggs when the building shook. She grabbed her 7-year-old son, who was standing nearby and hunched over him as they fell to the ground. An excruciating pain emanated from her hip as she yelled for help from beneath a pile of concrete.
Local doctors told her there was little they could do. The ball-shaped ending of her femur, or thigh bone, had separated from the hip socket and was pushed backward, and the hip had sustained a fracture. The doctors shook their heads and gave her pills for the pain.

Hospitals in Haiti are not equipped to deal with such an injury, but a Boston-area doctor who flew to Haiti in February as a part of a medical team organized by Partners in Health knew that doctors here could. He brought the 25-year-old woman, who had been living in a tent since the quake, to the United States, and she is scheduled to undergo hip replacement surgery today at Massachusetts General Hospital.

Administrators at the hospital say Cajuste is their first “formal’’ patient, coming directly from Haiti with severe injuries sustained in the earthquake. The hospital has treated some walk-in patients injured in the quake.
Cajuste, lying in her hospital bed yesterday afternoon, spoke through her brother, Sean St. Fort, who translated for her.
“I’m thankful to be here, and I hope I can continue with my studies to be a nurse after my surgery,’’ she said.

The surgery, estimated by the hospital to cost as much as $70,000, is being provided free of charge to Cajuste, who flew into Hanscom Field on Wednesday on a private plane arranged by CARE Network, an international humanitarian organization.
Robert McLaughlin, an orthopedic surgeon with Coastal Orthopedic Associates in Beverly, said yesterday in a telephone interview that when he first saw Cajuste hobble on crutches into the clinic in Haiti six weeks after the quake, he was moved.
“She had a blank look on her face, like she was totally demoralized and there was no hope,’’ McLaughlin said. “The screaming was behind her at that point.’’

By then, the end of her femur had died and was dissolving, he said.

“If she had received immediate attention after her injury, her hip joint could likely have been repaired, but now, she requires a total hip replacement,’’ McLaughlin said.

McLaughlin stayed in Haiti a week. When he returned to Boston, he got in touch with Mark Vrahas, a surgeon at Massachusetts General Hospital who specializes in pelvic injuries.

Vrahas offered to provide his services for free, and soon the hospital was on board as well. In the meantime, McLaughlin worked to obtain a visa for Cajuste, which was granted on humanitarian grounds.

Vrahas declined to comment for this story, but McLaughlin said, “He accepted her case without a second thought and helped to convince the hospital to accept her for free care.’’

Andrew Marx, a spokesman for Partners in Health, which provides medical care and social services to impoverished countries, said the organization has brought 20 Haitian earthquake victims to this country for medical treatment and helped bring over more than 10 other patients.

St. Fort, who lives in Miami, flew to Boston with his sister to provide support and has been staying at a hotel.
“I’m grateful that she was brought here, to get the operation she needs,’’ he said. “If nothing was done, I don’t think she would have much of a life.’’

“If you have any sort of disability in that country, you might as well get pushed off a cliff because there are no resources for you,’’ McLaughlin said.

Cajuste faces a long road to recovery. She will probably undergo weeks of physical therapy to learn to walk with her new hip joint. But the somber look on her face has been replaced with a bright smile.

“I’d like to continue my studies to become a nurse, so I can help people in my country,’’ she said.’’ Being in this condition, it makes me understand.’’

McLaughlin was happy to have had the chance to help.

“Rarely can you make a real difference in someone’s life,’’ he said. “People were telling me that it could never happen, that it would be too hard to coordinate, but I have this bulldog mentality, and those comments made me want to work harder. For Nerlin, she had no other opportunity. This surgery will change her life dramatically, because without it, she would suffer a lifetime of pain.’’