Under New Model, Patients Placed in Jeopardy 74% of the Days Studied

This is the first in a series of reports your MNA negotiating committee will provide as we continue our campaign to reverse the misguided and dangerous staffing practices being forced upon nurses by our management team. While the new model of care went into effect officially on Jan. 25, on a number of units, the changes to the staffing grids occurred in September, which explains why we have chosen this time frame for our first report. The findings from these reports are shocking, and include a number of harrowing incidents that have resulted in serious harm to our patients. This data and anecdotes we are gathering will soon be shared with our Board of Trustees, and if need be, the public, as these practices are tantamount to nursing malpractice perpetrated by our nursing leadership. 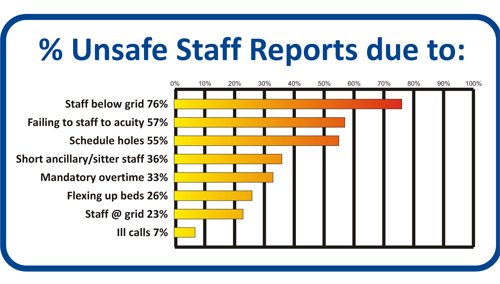 We want to thank all those who have taken the time to fill out unsafe staffing reports, and encourage all nurses to fill out a form any time they feel conditions prevent them from delivering the care their patients need to be safe. Documenting the reality of this crisis is essential to our effort to address it.