BOSTON, MA -- At a State House press conference today, advocates presented lists of over 40 Massachusetts hospitals with money stored in offshore accounts (see list at the end of this release) and urged legislators to demand greater transparency in hospital finances by passing The Hospital Profit Transparency & Fairness Act (H3844). The initiative petition will require hospitals to report all investments, including the unreported millions stashed in the Cayman Islands.

Following the press conference, a Hospital CEO mascot dressed in a ‘Fat Cat’ costume delivered Cayman Island beach towels to legislators to highlight the millions hospitals are hiding in the Cayman Islands. 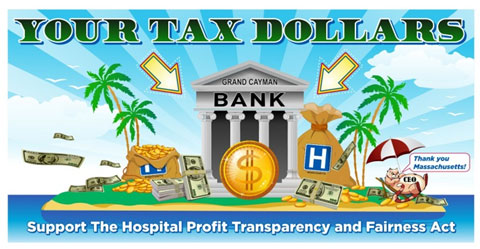 Karen Higgins, critical care nurse at Boston Medical Center, past president of the Massachusetts Nurses Association and Co-President of National Nurses United explained: “Hospitals in Massachusetts receive half their revenues from tax dollars including Medicare, Medicaid, public employee and retiree health insurance, taxpayer funded grants, loans, subsidies and waivers on local, state and federal taxes. This week legislators debate the state budget and decide how many of our tax dollars they will provide to hospital administrators. Yet legislators have NO idea how much money hospitals store in offshore accounts or why hospitals don’t keep their excess reserves in Massachusetts’ banks.”

Higgins continued, “Hospital CEOs in Massachusetts are paid excessive compensation packages that bear no relationship to the quality of care or to patient outcomes like readmission rates, where Massachusetts ranks among the worst in the nation. Legislators and the public have the right to know how their tax dollars are being spent, especially when profitable hospitals are cutting needed services.” more→

Rep. Jay Kaufman (D-Lexington) Chair of the Committee on Revenue stated: “The data we're hearing today is new and also disturbing. We've been struggling mightily - and investing millions of taxpayer dollars - to keep healthcare costs in check. Why are our hospitals keeping accounts in the Caymans where they're hidden from our oversight? Why are these funds not in Massachusetts banks? How much is there? We - taxpayers and legislators - have a right to know about what our hospitals are doing with our tax dollars. More than that, we have a responsibility to know, and the hospitals have a responsibility to tell.”

Rep. Josh Cutler (D – Duxbury) said: "I am deeply troubled to learn that some Massachusetts hospitals are storing funds offshore in the Cayman Islands and not disclosing it. Before we provide these hospitals with public money for reimbursements we should be demanding greater transparency and accountability."

Alan Sager, Professor of Health Policy and Management and Director of the Health Reform Program at Boston University’s School of Public Health commented on this issue: “Some of the people running hospitals have lost touch with the financial circumstances of ordinary citizens of our state – and with the struggle many people face in affording both high health insurance premiums and soaring co-insurance and deductibles. High CEO salaries are one reason they have lost touch. Another reason is that Massachusetts’ hospital costs are the highest in the world. “The accounts held in the Cayman Islands and other places raise questions. How much money is involved? Why do hospitals park money overseas? What do they hope to gain? Is it freedom from regulatory oversight or greater flexibility in spending? If so, why do hospitals want those things?

Joe DiMauro from the Coalition for Social Justice said “This is an outrage! Everyone assumes that non-profit hospitals exist to care for their patients, not to enrich themselves at the expense of taxpayers via hidden accounts stored in foreign countries where no one can monitor how they are used! Why are hospitals storing money in offshore accounts where neither regulators nor policymakers can evaluate how much excess revenue they have or if they are spending that excess revenue on CEO perks or patient care?"

Nathan Proctor, State Director of Massachusetts Fair Share said: “While it's unclear why hospitals move money overseas to offshore accounts, the effects are simple enough: We don't really know how much money they have. Given that taxpayers provide a huge portion of the revenue streams of these hospitals, I think we have a right to know. Given that costs keep going up and up and up, we have a right to know where that money ends up. It's fair, it's common-sense. We can’t address rising costs if our biggest medical centers are hiding behind offshore accounts in places like the Cayman Islands.”

The Hospital Profit Transparency & Fairness Act (H3844) will guarantee taxpayers the right to know exactly how their health care dollars are spent by hospital administrators. The transparency act requires that hospitals receiving tax subsidies, disclose in a timely and fully transparent manner how large their profit margins are, how much money they hold in offshore accounts, and how much compensation they pay their CEOs. To ensure access to needed services by all patients, the act also provides for enhanced funding options for hospitals serving poorer populations.