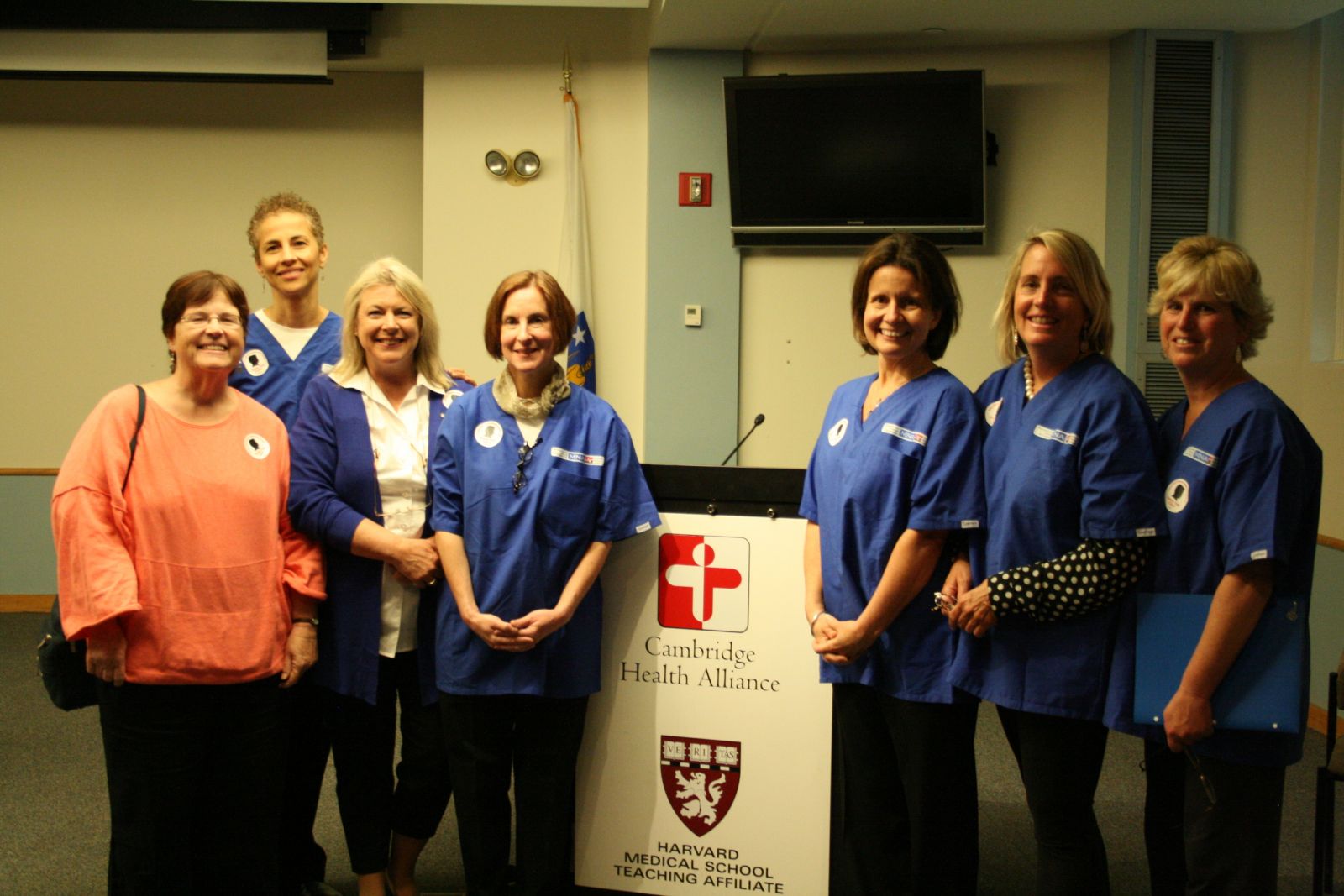 Here’s a great story in the Cambridge Chronicle about Wednesday’s DPH hearing on Cambridge Health Alliance’s cold-hearted proposal to close a much needed, award-winning program for the care of young children with serious psychiatric disorders.  Our nurses, joined by dozens of activists, political officials and parents of former patients filled their hearing and blasted CHA for this callous decision.

http://www.wickedlocal.com/cambridge/features/x1398952768/Large-crowd-attends-CHA-hearing-on-child-psychiatric-care?zc_p=1#axzz2StBnYYin
Large crowd attends CHA hearing on child psychiatric care
CAMBRIDGE – At the Cambridge Health Alliance, more than 120 nurses, parents, hospital employees and public officials filled an auditorium and spilled out into a hallway Wednesday, May 8, for a hearing on the fate of the CHA’s inpatient psychiatric unit for children.
The Massachusetts Department of Public Health called the hearing after the CHA announced last month that it planned to eliminate 11 of the unit’s 27 beds and stop treating children ages 3 to 7. The plan would merge the Child Assessment Unit (CAU) with the adolescent unit beginning July 8.
At the hearing, CHA CEO Patrick Wardell said the hospital had decided to expand the initial plan on advice from the DPH, the state Department of Mental Health and the Massachusetts Behavioral Health Partnership. It would continue to admit 6- and 7-year-olds but cease to serve 18-year-olds.
But the change made no difference to those who had come to testify. For more than two hours, they urged the DPH to block the plan.
Local government officials complained that they had been left out of the decision and learned of it through other channels. Somerville Mayor Joseph Curtatone read it in a newspaper, and Cambridge City Councilor Denise Simmons heard about it through social media.
“This decision was made unilaterally without community involvement,” said Cambridge city Councilor and state Rep. Marjorie Decker. “You need the community to support you, but you have no support outside your own board. You need to involve the rest of us.”
CHA nurses said they feared that treatment of the very young would suffer if they were in the same unit as teenagers. The CAU now serves children ages 3-11 separately.
“For 37 years, I have cared for psychiatric patients from under 2 years old to 103,” said Molly Torra, RN. “The specificity needed to treat young children cannot be over emphasized. Some people have the idea you can work with young kids in a combined setting. I say no.”
Regina Galarza, a nurse at the CHA for 12 years, said the CAU is designed to let parents stay with their children, producing multiple benefits. In the hospital, a parent’s presence avoids separation anxiety and helps the nurses and doctors establish trust quickly. At the same time, parents learn techniques to manage their children better during a crisis.
Parents recounted how the CAU had saved their children’s lives, contrasting the loving care their children received there with traumatic experiences at other facilities
After a violent episode, Susan McCarthy’s 4-year-old daughter was placed in an adult psychiatric ward “with drunks an arm’s reach away.” Finding age-appropriate care at the CAU gave her a new life.
“I’m almost speechless thinking about them closing these beds down,” McCarthy said.
CHA officials said they had to combine the units and reduce the number of beds because their reimbursements from Mass Health and Medicaid were too low to cover the hospital’s costs.
“We’ve had to confront the reality that reimbursement for psychiatric care is inadequate. We can’t continue to do it with our current level of staffing,” said Dr. Jay Burke, CHA chief of psychiatry.
Decker said it was unfair that hospitals were bearing this burden without broader financial support, but that was the very reason they needed to involve the community.
David Matteodo, executive director of the Massachusetts Association of Behavioral Health Systems, concurred. He proposed that state agencies, legislators, insurers, providers and other constituents should work together to identify the need for child inpatient services and then find a way to fund them.
“It’s a shared problem, and we need a shared answer. Cambridge is not unique in struggling to maintain its services,” he said.
According to a CHA report dated May 7, 2013, 97 percent of patients served in 2012 were age 6 and older. The average number of patients per day last year was 20.
The DPH will review Wednesday’s testimony, the CHA proposal and service records to determine whether the proposed cuts would deny patients access to needed services. The department will issue findings by May 23. If it determines that the CHA must retain the present level of service, the hospital will have 15 days to respond.
To read portions of the day's various testimonies vist:
http://www.massnurses.org/region5/news/p/openItem/8307