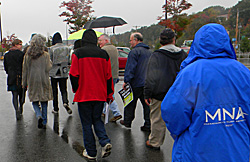 Yesterday, MNA/NNU Region 2 leaders Kathie Logan RN and Sue Morris-Smith RN participated in a Walmart Day of Action at the Walmart Store on Boland Way in Worcester - one of the 40 actions across Massachusetts and the 600 actions across the US in solidarity with local Walmart workers and workers taking on the boss and going on strike!  The Central MA delegation of local activists marched across the store parking lot and into the store.  Kathie Logan RN then delivered a letter to the store manager, asking him to stress upon Walmart executives to provide a living wage, health insurance and safe working conditions to their workers and cited MNA/NNU’s Main St. Contract for America.

Background on this Issue 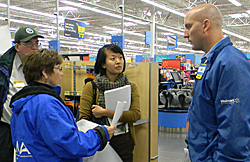 -As community and elected leaders across the country call for changes at Walmart, workers from stores throughout the Dallas-area went on strike Wednesday morning in the first-ever Walmart Associate walk-out in Dallas protesting attempts to silence and retaliate against workers for speaking out for improvements on the job.  Walmart workers from stores in Miami, the DC-area, Sacramento, Southern California and the Bay-area are also walking off the job.  Along with community supporters, the striking Associates announced that they would be taking their calls for change to Walmart's global corporate headquarters in Bentonville, Arkansas, where Walmart is holding its annual financial analyst meeting.  Last week, Associates in Los Angeles walked-off the job <http://www.salon.com/2012/10/04/walmart_workers_on_strike/>  calling for an end to the retaliation.

"We cannot continue to allow Walmart's attempts to silence and retaliate against workers continue," said Stacey Cottongame, a striking worker from the Ennis, TX store.  Stacey is one of thousands of members of OUR Walmart <http://forrespect.org/> , the nationwide Associate organization calling for changes at the company.  "Our jobs shouldn't be on the line because we are speaking out for better jobs and a stronger community."

Workers began walking off the job at 6:30 am this morning at the Ennis store and later joined Associates from the Lancaster store.  Together, they met Associates at the Dallasstore, who walked off the job and were joined by community supporters. The group protested outside the Dallas store with signs reading, "Stand Up, Live Better, Stop Retaliation" and "Stop Trying to Silence Us."

Walmart workers and community leaders have been calling on Walmart and Chairman Rob Walton to address take home pay so low that Associates are forced to rely on public programs to support their families and understaffing that is keeping workers from receiving sufficient hours and is also hurting customer service. The company has not only refused to address these concernsthat are affecting 1.4 million Associates across the country, it has attempted to silence those who speak out and has retaliated against workers for raising concerns that would to help the company, workers and the community.

The strike in Dallas comes days after Walmart Associates in Los Angeles held the first-ever strike against retaliation.  Workers striking at Walmart controlled warehouses outside of Chicago just won an end to illegalretaliation following a 21-day strike during which clergy and community supporters were arrested <http://www.thenation.com/blog/170274/riot-police-arrest-peaceful-protesters-rally-striking-walmart-workers>  by riot police during the peaceful protest. Warehouse workers in Southern California <http://www.latimes.com/business/money/la-fi-mo-warehouse-workers-20120912,0,6330694.story>  were on a 15-day strike that included a six-day, 50-mile pilgrimage for safe jobs.   In advance of Walmart's annual financial analyst meeting on October 10, OUR Walmart members shared <http://www.reuters.com/article/2012/10/01/us-walmart-employees-idUSBRE8901B120121001>  concerns about the scheduling and staffing problems to a room full of financial analysts.

As front line Walmart workers are facing these hardships, the company is raking in almost $16 billion a year in profits, executives made more than $10 million each in compensation last year.  Meanwhile, the Walton Family <http://walmart1percent.org/family/>  - heirs to the Walmart fortune - are the richest family in the country with more wealth than the bottom 42% of American families combined.

Energy around the calls for Walmart to change its treatment of workers and communities has been building.  In just one year, OUR Walmart <http://forrespect.org> , the unique workers' organization founded by Walmart Associates, has grown from a group of 100 Walmart workers to an army of thousands of Associates in hundreds of stores across 43 states. Together, OUR Walmart members have been leading the way in calling for an end to double standardsthat are hurting workers, communities and our economy.

The alleged Mexican bribery scandal, uncovered by the New York Times <http://www.nytimes.com/2012/04/22/business/at-wal-mart-in-mexico-a-bribe-inquiry-silenced.html?pagewanted=all> , has shined a light on the failure of internal controls within Walmart that extend to significant breaches of compliance in stores and along the company's supply chain.  The company is facing yet another gender discrimination lawsuit <http://www.sfgate.com/news/article/State-bias-suit-over-Walmart-to-proceed-3891034.php>  on behalf of 100,000 women in California and in Tennessee <http://www.businessweek.com/news/2012-10-02/wal-mart-sued-by-women-claiming-5-state-bias-lawyers-say> .  In the company's warehousing system, in which Walmart has continually denied responsibility for the working conditions for tens of thousands of people who work for warehouses where they move billions of dollars of goods, workers are facing rampant wage theft and health and safety violations so extreme that they have led to an unprecedented $600,000 in fines.   The Department of Labor fined <http://www.nytimes.com/2012/07/25/business/cjs-seafood-fined-for-labor-abuses.html?_r=1>  a Walmart seafood supplier for wage and hour violations, and Human Rights Watch <http://www.worldpolicy.org/blog/2012/09/17/walmarts-human-trafficking-problem>  has spoken out about the failures of controls in regulating suppliers overseas, including a seafood supplier in Thailand where trafficking and debt bondage were cited.

Financial analysts <http://finance.yahoo.com/blogs/daily-ticker/>  are also joining the call for Walmart to create better checks and balances, transparency and accountability that will protect workers and communities and strengthen the company.  At the company's annualshareholder meeting in Bentonville, OUR Walmart member Jackie Goebel brought a stadium full of shareholders to their feet applauding her call for an end to the short staffing that's hurting workers and customer service.  A resolution proposed by Associate-shareholders to rein in executive pay received unprecedented support, and major pension funds <http://www.nytimes.com/2012/06/05/business/wal-mart-vote-reflects-rise-in-shareholder-unhappiness.html>  that voted their shares against Walmart CEO and members of the board this June amounting to a ten-fold increase, and overall 1 in 3 shares not held by theWalton family against the company's leadership.

These widespread problems have also thwarted Walmart's plans for growth, particularly in urban markets.  Calling the company a "bad actor," New York City mayoral candidates <http://politicker.com/2012/04/watch-new-york-city-politicians-call-for-wal-marts-head-video/>  have all been outspoken in their opposition to Walmart entering the city without addressing labor and community relations' problems.  This month, the city's largest developer announced <http://www.crainsnewyork.com/article/20120914/REAL_ESTATE/120919923>  an agreement with a union-grocery store at a site that Walmart had hoped would be its first location in New York. In Los Angeles, mayoral candidates <http://blogdowntown.com/2012/06/6851-garcetti-greuel-and-perry-announce-they-wont>  are refusing to accept campaign donations from the deep pockets of Walmart, and in Boston, Walmart was forced tosuspend <http://www.boston.com/news/local/massachusetts/articles/2012/06/16/walmart_abandons_plans_for_stores_in_somerville_watertown/>  its expansion into the city after facing significant community opposition.