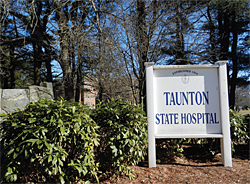 The Massachusetts Nurses Association/National Nurses United is currently engaged in an organization-wide effort to protect mental health services in the state. The effort began after the Massachusetts Department of Mental Health informed members of the MNA/NNU of its plan to close Taunton State Hospital, one of only six state-operated mental health facilities specializing in caring for those who suffer from acute and chronic mental illness.

The shocking proposal, which was announced during a meeting of senior DMH staff, could result in more than 169 beds being eliminated from the commonwealth’s already strained and overloaded mental health system.

“This is a cold hearted and dangerous decision that will have devastating consequences for the mentally ill in our state,” said Karen Coughlin, RN, a nurse at Taunton State Hospital and vice president of the MNA/NNU. “We have no mental health care safety net in Massachusetts. There are not, and have not been, enough beds or services in the system for years. This decision will only exacerbate a long-standing crisis. People will continue to go without care, crime will increase, homelessness will increase, more people will end up in the corrections system and many more will commit suicide. This closure along with other cuts to programs and services represents the state’s continued abandonment of the mentally ill in our society.”

To understand the role and value of the state’s inpatient facilities, one needs to have a clear picture of the clients they serve. “At our inpatient facilities, particularly at my facility, Taunton State Hospital, we take care of a significant number of forensic patients, which means they come to us from corrections facilities or the court system. They have varying levels of criminal involvement and some with histories of violent behaviors. At all of our facilities we have many frail, elderly mentally ill patients who can’t be cared for in nursing homes. A large percentage of our patients have a dual diagnosis of mental illness and substance abuse which complicates their placement in community settings. We have a number of women suffering from serious trauma who are self abusive and suicidal and need intensive mental health monitoring and care. These are patients who often have nowhere else to go in the system,” Coughlin explained. “This plan makes no sense. Our system has been operating well over full capacity for years. We can’t provide the care people need even with our facility open. The other issue is geography. We are now forcing patients and families to travel to Worcester, Tewksbury or out to Western Mass. for their mental health care. It’s a travesty.”

In fact, there is a shortage of psychiatric beds throughout the entire health care system in our state, including the private sector. Right now, psychiatric patients clog emergency rooms across the state, some waiting for 72 hours or longer for a psychiatric bed placement. According to a recent statement by Attorney General Martha Coakley, in a report concerning the disposition of psychiatric beds following the sale of hospitals to Cerberus/Steward Health Care, “The need for inpatient psychiatric and detoxification hospital beds is critical. Any further reduction in these services would have a significant negative impact on the ability of the commonwealth to provide for mental health services.”

A 2009 report by the DMH showed that the census at facilities like Taunton State was running at an average of 97 percent, and at the time of the closure announcement, the census at Taunton State was over capacity. The same DMH document pointed to “an already significant reduction to DMH community services with the elimination of day and employment services and a reduced case management work force.” It further stated that, “more than 200 of the 788 adult patients in DMH continuing care facilities are ready for discharge but appropriate community services are not available.”

Public opposition to the proposed closure of Taunton State Hospital was clear and swift. At a meeting organized by Sen. Marc Pacheco (D-Taunton), more than 100 local and state officials, state employees and concerned citizens crowded into a Taunton church to voice their collective opposition to the proposed closure. Pacheco also made it clear that the proposal is not set in stone. “For those that think [the proposal] is a done deal, please get that out of your mind. It is not a done deal,” said Pacheco. “The Taunton facility is crucial and a critical component to the statewide mental health system.”

In addition to Pacheco, a number of politicians and other officials from the region attended the meeting to show their support, including Rep. Patricia Haddad (D-Somerset); Rep. Keiko Orrall (R-Lakeville); Rep. Shaunna O’Connell (R-Taunton); Mayor Thomas Hoye Jr. and representatives from the offices of U.S. Rep. Barney Frank and U.S. Sen. Scott Brown.

Since then, lawmakers from throughout the state have called for a halt to the closure, as well as for a study of the state’s entire mental health system. It is hoped that any forthcoming studies will assess the availability of and need for expanded community supports and services; the number of existing beds in the system; and the number of beds needed.

The call for such a study represents a major step forward for legislators in the commonwealth in that they are acknowledging there is no longer a true system for mental health care in the state and that dramatic changes need to occur before additional damage is done to an already broken system.

“This has gone beyond an issue of funding and finances,” Coughlin concluded. “This is a moral and ethical issue of human rights and common decency.”