The Supreme Court vs. American democracy

By a slim 5-4 majority and in a stunning show of judicial activism, the U.S. Supreme Court ruled this January that corporations are free to spend unlimited amounts of money to help elect politicians of their choosing.

Since 1907, when Republican President Theodore Roosevelt signed a law banning corporate donations to federal political campaigns, federal law has placed limits on corporate political activity. Similarly, since 1947 unions have been banned from using general treasury funds on behalf of federal candidates. Only voluntary contributions to union PACs may be spent to directly help elect candidates to federal offices. 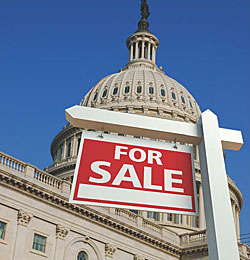 National Nurses United, of which the MNA is a founding member, has come out strongly against the court’s decision (Citizens United vs. FEC). As Rose Ann DeMoro, executive director of the NNU noted, this is a “disastrous ruling for American workers and American democracy … the healthcare debate of the last year has provided a sobering reminder of the already pervasive influence of giant pharmaceutical and insurance corporations. The last thing our democracy and political system needs is even more spending and political sway by the wealthiest interests in the country.”

Moreover, DeMoro continued, “It is ludicrous to think that unions and working people could ever match the spending by multi-billion dollar corporations.”

What is bad for workers and unions is also bad for small businesses. The American Independent Business Alliance, a non-profit business network located in 70 communities across the United States, notes that the Supreme Court decision is “radically anti-business when viewed from the perspective of America’s 6 million or so independent businesses. Independent business owners often face a decidedly uneven playing field when competing against major corporations due, in part, to tax loopholes, subsidies, federal handouts and preferential treatment bestowed by politicians. Opening electoral contests to direct corporate campaign spending further undermines fair market competition and recklessly endangers democracy.”

Across the political spectrum, the American people seem to agree. According to one national poll, 69 percent of Americans agree with the statement that “The [Supreme Court] decision hands more influence to lobbyists and special interest groups to tip the outcome of elections.” Sixty-six percent of Democrats moderately or strongly disagreed with the Court’s decision, as did 63 percent of Republicans and fully 72 percent of Independents. Seventy-four percent agreed that approval by a majority of shareholders should be required before a corporation could run a political advertisement.

During a CNN interview, Republican Senator and 2008 presidential candidate John McCain said he was disappointed with the Court’s ruling. President Obama declared that the Supreme Court decision was “devastating to the public interest.” The decision was “a major victory for big oil, Wall Street banks, health insurance companies and other powerful interests that marshal their power every day in Washington to drown out the voices of everyday Americans.”

So, what can be done?

Congress can take steps to mitigate some of the damage caused by the Supreme Court’s ruling. Massachusetts Congressman Mike Capuano, for instance, has introduced legislation that would require a shareholder vote before a corporation’s general treasury funds could be spent on electoral activity. “We should be moving in the exact opposite direction, limiting outside influence, not enhancing corporate voices in our elections,” Capuano stated. “I have always been a strong defender of free speech, and I always will be. This ruling ignores the free speech rights of the shareholders themselves. Shouldn’t they have a say in how these funds are spent?”

Capuano also favors the public financing of elections, a position he shares with former U.S. Sen. Warren Rudman (R-N.H.) among many others. Rudman wrote in response to the Supreme Court decision that it is time for Republicans to “return to our roots and take up Teddy Roosevelt’s challenge from over a century ago by enacting the only real and lasting solution I know: citizen-funded elections. Under the proposed Fair Elections Now Act, sponsored by more than 130 members of Congress, money from special interests would be replaced by small donations from constituents and matching federal funds.”

Attempts to legislate reform along the lines suggested by Capuano are desperately needed. But ultimately we may need to change the Constitution—a huge undertaking—to undo the damage caused by the Court in this and other pro-corporate decisions. As constitutional law professor and Maryland state legislator Jamie Raskin notes, “American citizens have repeatedly amended the Constitution to defend democracy when the Supreme Court acts in collusion with democracy’s enemies, whether they are slave masters, states imposing poll taxes on voters or the opponents of woman suffrage.”

Sen. John Kerry (D-Mass.) agrees with this approach, testifying before a congressional committee that “we need a constitutional amendment to make it clear once and for all that corporations do not have the same free speech rights as individuals.”

It is up to us to get informed and get involved. As Washington Post columnist E.J. Dione writes, “The only proper response to this distortion of our political system by ideologically driven justices is a popular revolt…. It is time for a new populist-progressive alliance to fight back against this assault on American democracy.”