CANTON, Mass. – Registered nurses throughout the Commonwealth report that quality of care in Massachusetts hospitals is suffering as nurses have less time to spend with patients who are getting sicker each year, according to the 2019 “State of Nursing in Massachusetts,” a survey released annually during National Nurses Week.

“Nurses are crying out for help to care for the sickest, most vulnerable members of our communities,” said RN and Massachusetts Nurses Association President Donna Kelly-Williams. “When a nurse has too many patients too care for at one time, and hospital executives do nothing about it, the quality of care suffers.”

Click here for a copy of the executive summary of the survey. For the first time since 2014, nearly twice as many nurses say the overall quality of care in Massachusetts hospitals has gotten worse (39%) rather than better (21%). A record-high number of nurses now believe that the quality of care is getting worse. 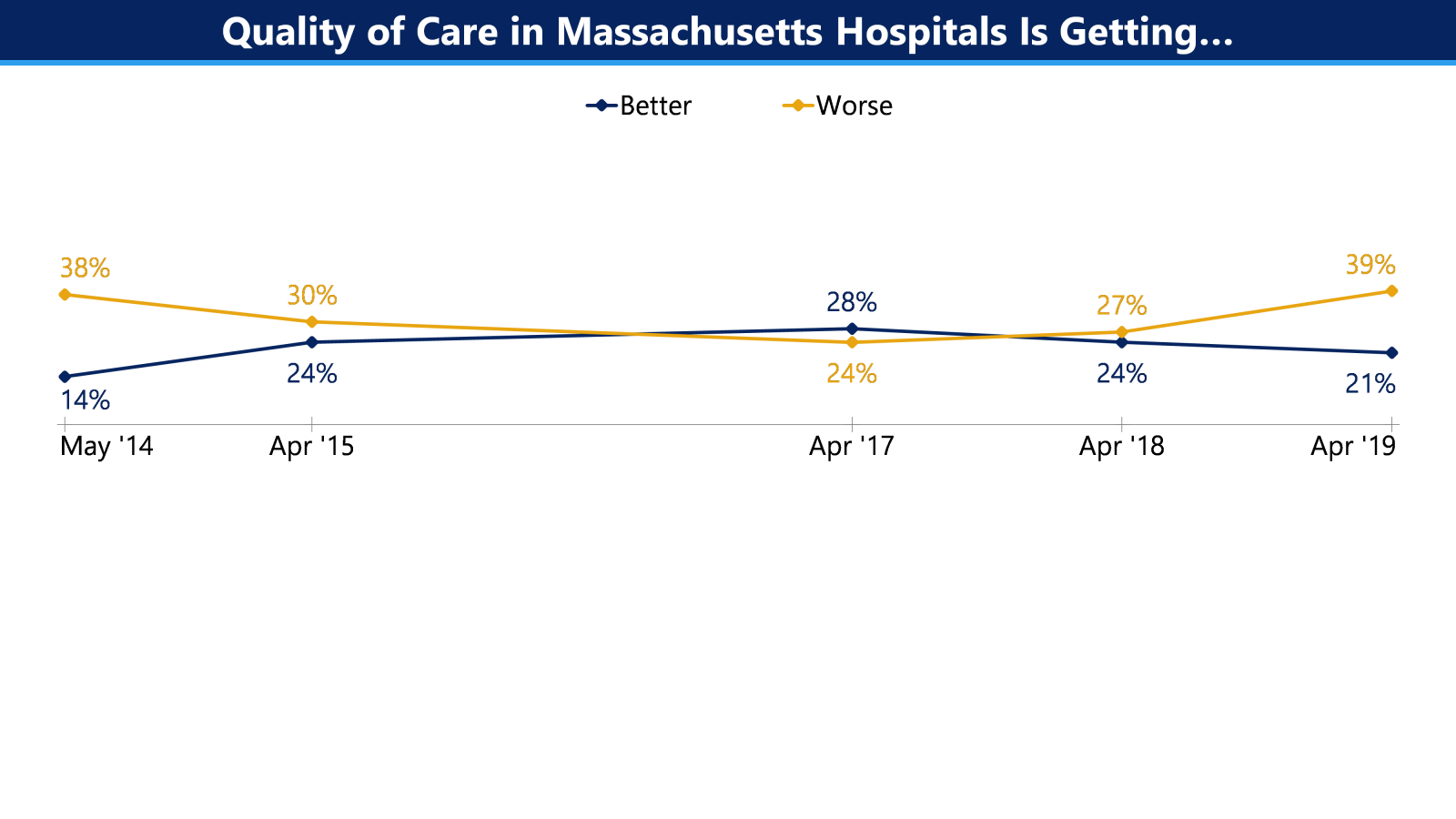 The staffing situation is not improving: a record-high 44% says staffing has gotten worse in the past four years, and a similar number say it has worsened since October. Two-thirds of nurses (65%) believe nurses at acute care hospitals are assigned too many patients to care for at one time. Just a third report that management typically adjusts patient assignments when they become unsafe. 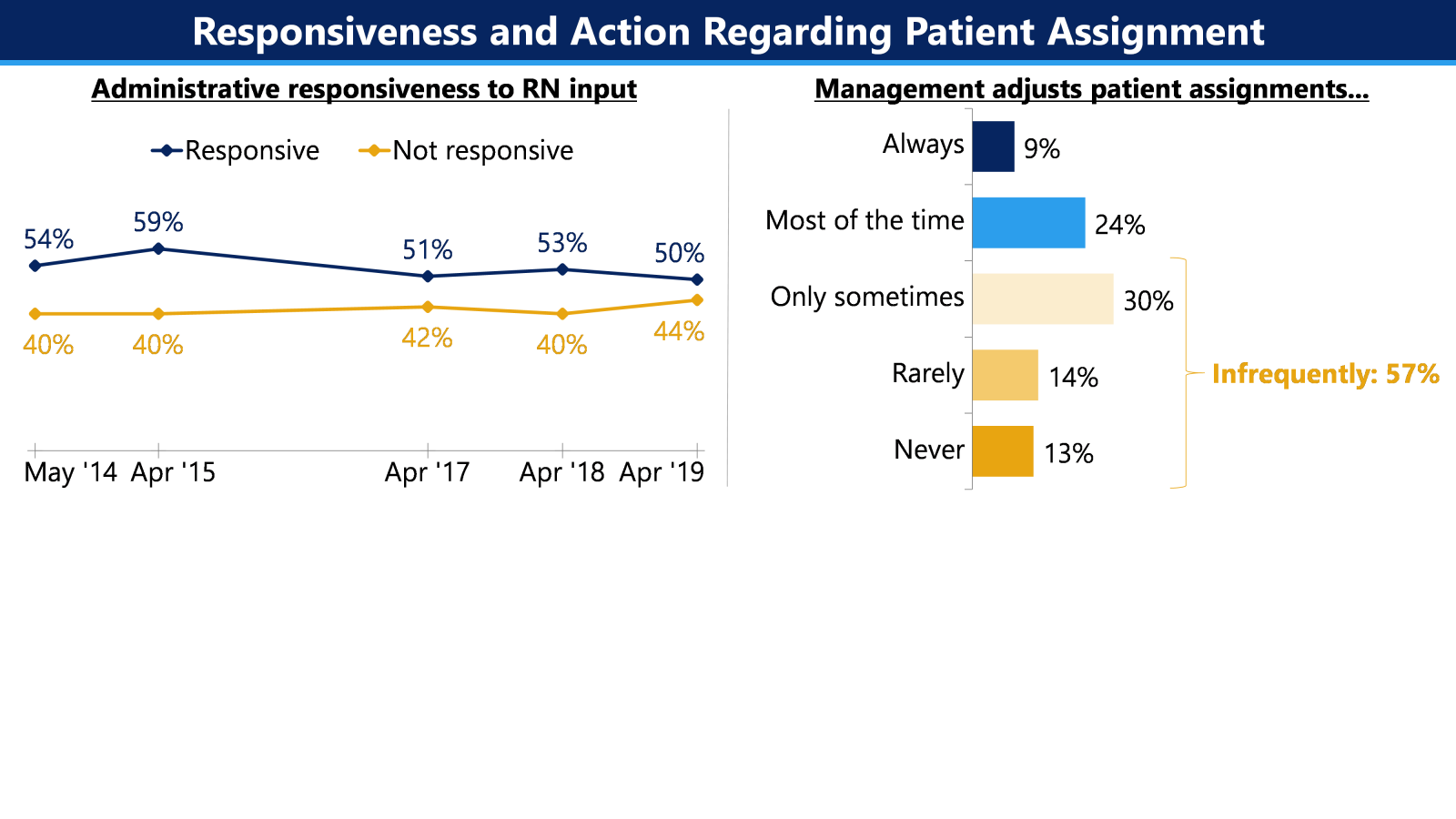 “Patient care conditions have actually grown worse since last year, when the hospital industry pledged to address this problem after misleading the public about the evidence supporting Safe Patient Limits,” Kelly Williams said. “Executives have not only failed to follow-through on addressing unsafe staffing, they have not even requested a meeting with the nurses and other coalition members behind Question 1.”

Surveyed nurses report similar inaction: A record-high 44% of nurses find that hospital administrators are not responsive to feedback from RNs regarding patient loads and nurse staffing levels. Nearly six-in-ten (57%) report that management does not consistently adjust patient assignments when needed.

Faced with this industry-created crisis, nurses have filed thousands of unsafe staffing reports with administrators at hospitals across Massachusetts. These reports document instances where nurses were forced to take excessive patient assignments that “poses a serious threat to the safety and well-being of my patients.”

“Objection and Documentation of Unsafe Staffing” forms, as they are called, are used by nurses in all MNA-represented hospitals, which is 73 percent of acute care hospitals. They are a tool for nurses to document, in real time, any situation where they come on their shift and are given an assignment that is unsafe for their patients, and that prevents them from delivering the quality care those patients require.

“The State of Nursing in Massachusetts” demonstrates that registered nurses – both union and non-union – believe such unsafe staffing conditions put patients at significant risk. Six-in-ten feel patient over-assignment decreases the quality of care they can provide, including 50% who say unsafe patient assignments greatly decreases the quality of care. 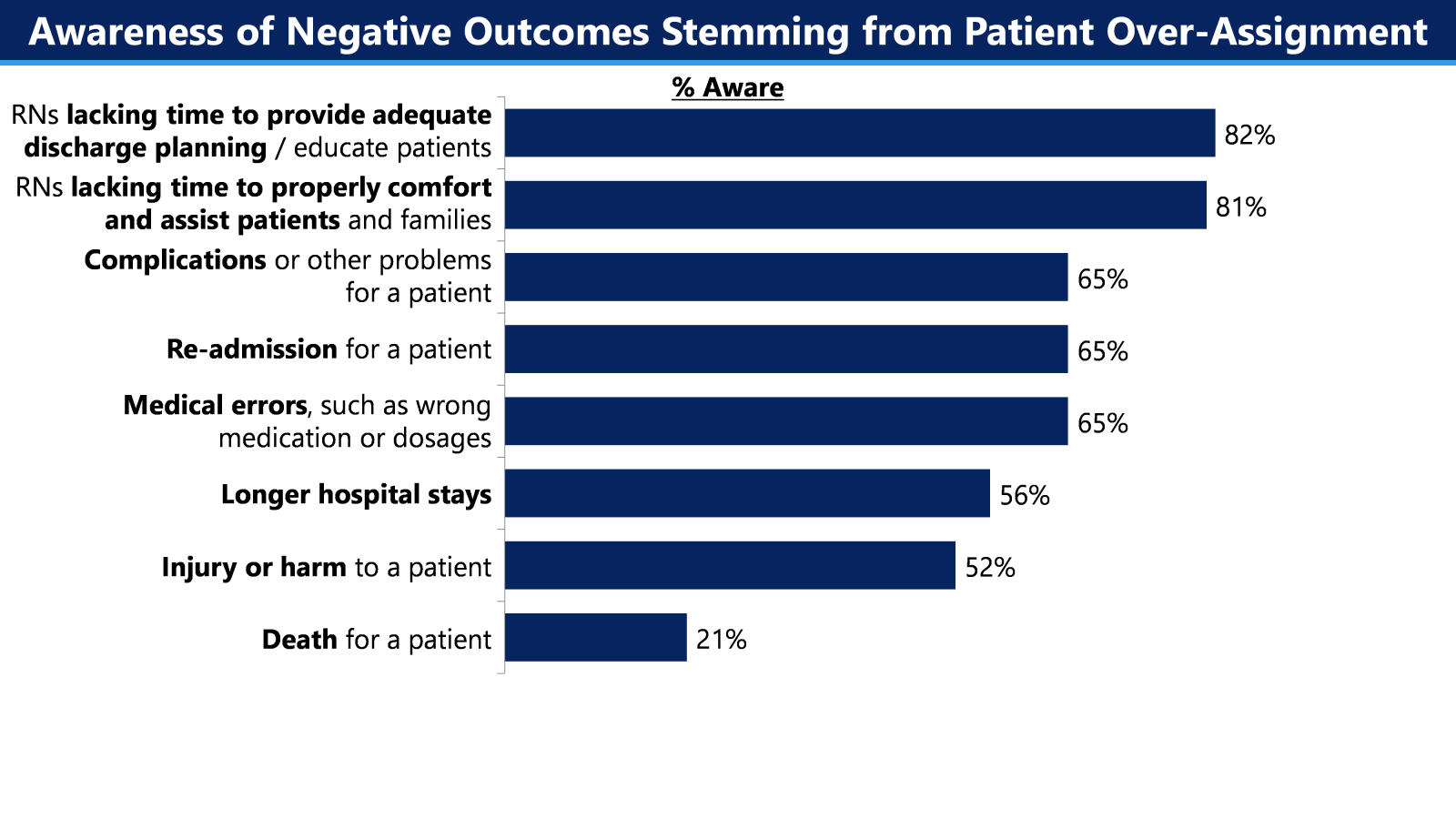 Hospital Industry Misinformation and a Call for Independent Fact-Finding

During the 2018 campaign for Safe Patient Limits, hospital executives distributed materials opposing the initiative to patients, and also mailed opposition materials to patients’ homes. More than two-thirds of nurses (68%) feel these campaign activities were inappropriate.

“It is clear from the severity of this problem and from the misinformation spread by hospital executives why nurses who care for patients in all types of settings back legislation to provide more independent studies about our nursing workforce and the patient care environment,” Kelly-Williams said.

Nearly all nurses (93%) support the creation of an independent legislative commission to conduct studies on the state of nursing in Massachusetts. The Workforce Development and Patient Safety Act (S. 1255/H. 2004) is sponsored by Senator Diana DiZoglio and Representative Dan Ryan. The bill would:

“The State of Nursing in Massachusetts” was commissioned by the Massachusetts Nurses Association and conducted April 2-18, 2019 by Beacon Research. It utilized gold-standard interviewing practices as outlined by the American Association of Public Opinion Research (AAPOR).

Respondents were randomly selected from a complete file of the 100,000 nurses registered with the Massachusetts Board of Registration in Nursing, and geographic quotas were used to ensure accurate representation across all regions of the state. A total of 501 Interviews were conducted on landlines and cellphones by trained, professional interviewers; the average length of a completed interview was 20 minutes.

A majority (60%) of RNs interviewed were not MNA members.