Below is the front page story from today’s Boston Herald concerning the historic victory by Marty Walsh for Mayor of Boston.  The photo on the front page features our own Executive Director Julie Pinkham (second from left) joining the celebration on stage just before Walsh delivered his victory speech.  A two-time winner of the MNA/NNU Legislator of the Year Award, a long time labor leader, and a passionate defender of our patients and the underserved, the MNA/NNU endorsed and offered strong support for Walsh’s campaign and looks forward to working with him in the years ahead. 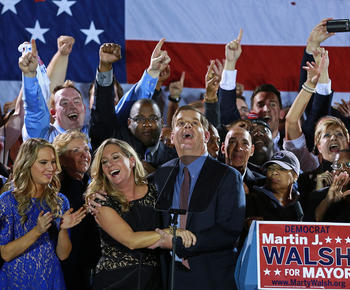 “Let me tell you, my parents had big dreams for their kids, but I’m not sure they were this big,” Walsh said at the Park Plaza Hotel. “For this kid from Taft Street in Dorchester, you’ve made Boston a place where dreams come true. Together, we’re going to make Boston a place where dreams come true for every child and every person in every corner of this city.”

Walsh — who received 72,514 votes to Connolly’s 67,606 in a larger than expected turnout — took a congratulatory call from President Obama before hitting the ballroom stage to thousands of revelers.

He thanked his mom, his longtime partner Lorrie Higgins, and his late father, John, saying he stopped by his dad’s grave yesterday to say a prayer. Speaking in his thick Dorchester accent, Walsh also thanked Menino, saying: “We wish you and Angela the very best as you enjoy the years ahead.”

“I am so grateful for your friendship and support,” Walsh said, referring to his former preliminary rivals Golar Richie, Barros and Arroyo. “I’ll be a better mayor for your wisdom and insight.”

He spoke of the city’s resilience in the face of the April 15 Boston Marathon bombings and of the Boston Red Sox World Series win last week and pledged to carry that fighting spirit to City Hall.

“This is Boston Strong,” he said. “And together, we’re going to make Boston even stronger . . . Stand with me, because I’m ready to stand and work with you.”

“This is like a new legacy in the city, a great, new energetic vibe,” said Andrea Gendrolis, 40, a masseuse and neighbor of Walsh. “He represents everybody: the working class, single moms, everybody. He’s the one who can definitely keep this city on the right track.”

At the Westin Copley Plaza Hotel, Connolly — who led the polls for months — conceded to Walsh. While the West Roxbury city councilor hammered Walsh on the campaign trail over the $2 million-plus in special interest money that poured into his rival’s campaign, Connolly struck a conciliatory tone and pledged to back the mayor-elect.

Menino won five consecutive terms but decided earlier this year — after a string of health woes — not to seek a sixth, sparking a furious scrum for the city’s first open mayoral seat in decades.

Connolly jumped into the race before Menino made his announcement, followed by Walsh and 10 other candidates.