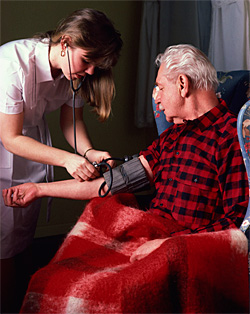 The lawsuit alleged that Medicare contractors and administrative review boards across the country rolled out a “clandestine” policy to limit Medicare coverage for nursing and therapy services even though official CMS rules say those benefits should be covered. The settlement clarifies what was supposed to be the “law of the land,” that Medicare ought to cover any reasonable treatment prescribed by a doctor. Home care agencies appear to be anticipating an expansion of clientele and MNA is hearing reports of new hiring in the home care sector.

A national class action lawsuit is ending with a settlement expected to have widespread positive repercussions for thousands of chronically ill and the home care industry. Glenda Jimmo* of Lincoln, Vt., was the lead plaintiff in a national class-action lawsuit filed after Medicare denied her coverage for nurses and home health aides, saying her condition was unlikely to improve.

A settlement filed in October with Christina C. Reiss, chief judge of the U.S. District Court in Vermont indicates that Centers for Medicare and Medicaid and Services has agreed to begin paying more often for skilled nursing and home health care for large numbers of the chronically ill. The court filing calls for the government to revise its Medicare manual to make benefits available even when care would only “maintain the patient’s current condition or ... prevent or slow further deterioration.” Essentially, in the future, Medicare cannot deny skilled nursing care and various forms of therapy for beneficiaries, regardless of their prognosis. If Judge Reiss approves the settlement, as expected, she would have authority to enforce it for up to four years.

The outcome means that patients with disabilities and chronic conditions like Alzheimer’s disease, multiple sclerosis and Parkinson’s disease, who in the past were unable to get access to care, should benefit. The changes will apply to the traditional Medicare program and to private Medicare Advantage plans. They apply to people 65 and older, as well as to people under 65 who qualify for Medicare because of disabilities.

Home care agencies appear to be anticipating an expansion of clientele and MNA is hearing reports of new hiring in the home care sector.The suit was filed against the U.S. Health & Human Services, which initially urged the judge to dismiss the lawsuit. Medicare officials denied that they had a formal policy requiring beneficiaries to show their conditions would improve. However, in a separate lawsuit in Pennsylvania, Medicare officials argued the reverse. In order for Medicare to cover skilled nursing care, they said in a legal brief, “there must be an expectation that the beneficiary’s condition will improve materially in a reasonable and generally predictable period of time.”

The administration has agreed to settle, but the final specific terms of the settlement await approval by the federal judge in Vermont. However some reports are that it could be a year before Medicare contractors get their final revised and clarified manuals – meaning that nurse and patients need to be aware of the change and push back on denials. Several patient advocates recommend that people should demand coverage that maintains their condition or slows deterioration right now, given that Medicare was supposed to be paying for it all along. “We will be urging beneficiaries and advocates to bring the agreement to the attention of contractors,” said Gill Deford, the director of litigation for the Center for Medicare Advocacy.

The lawsuit alleged that HHS, Medicare contractors and administrative review boards across the country rolled out a “clandestine” policy to limit Medicare coverage for nursing and therapy services even though official CMS rules say those benefits should be covered. The settlement clarifies what was supposed to be the “law of the land,” that Medicare ought to cover any reasonable treatment prescribed by a doctor even if it only aims to slow a person’s deterioration or maintain the current level of health.

Plaintiffs argued that Medicare has allowed the contractors that process its claims to use a so-called “improvement” standard over the last few decades. To the Center for Medicare Advocacy and the many other organizations, like the Parkinson’s Foundation, that joined the lawsuit, that standard allowed for cutting off physical, occupational and speech therapy and some inpatient skilled nursing services for patients who had plateaued.

Medicare is supposed to pay for reasonable treatment prescribed by a physician for any illness or injury. For the home care patients that this settlement is thought to affect the most, a doctor must have certified that a patient is homebound and must have prescribed treatment that only a skilled practitioner can provide. (The “skilled practitioner” rule keeps Medicare from paying for assistance with everyday activities like bathing and dressing.) Providers will still have to document that the services provided are “reasonable and necessary” for the diagnosis or treatment of a medical condition. They will also have to justify why skilled care is required. But it appears that the focus on the skills needed to provide care rather than the need for improvement will expand the number of Medicare beneficiaries eligible for post-acute care services.

The Parkinson’s Action Network was instrumental in arguing that for patients with degenerative diseases, holding steady or degenerating more slowly than one might otherwise is often the definition of success. Others argued that payment practices led to physicians changing their practice patterns, as doctors decided prescribing treatment that would not be covered would be pointless.

The settlement specifies that skilled care can qualify for Medicare coverage even if it merely serves to maintain someone’s current condition or prevents or slows further deterioration. Certain patients who have had claims rejected will be able to resubmit them. Various patient advocacy groups have expressed hope that Medicare will soon pay for many forms of therapy that it has not covered previously. One example cited is cerebral palsy patients, for whom physical therapy to maintain muscle mass is one possibility. For multiple sclerosis patients, there may be more approval for treatments for spasticity and gait training to prevent falls.

At this point there are no specifics on the cost of the increased coverage of nursing home, home care and physical therapy bills for patients previously denied coverage. One of the major winning arguments of plaintiffs was that the cost of therapy services would be offset by the savings benefit of reducing even more costly hospitalizations for complications as well as reducing readmissions and preventing the deterioration of someone with a chronic condition that can accompany a hospitalization.

The lead plaintiff, Glenda R. Jimmo, 76, of Bristol, Vt., has been blind since childhood. Her right leg was amputated below the knee because of blood circulation problems related to diabetes, and she is in a wheelchair. She received visits from nurses and home health aides who provided wound care and other treatment, but Medicare denied coverage for those services, saying her condition was unlikely to improve.

Problems and question remain
Two big remaining questions that patient advocates are still asking are how many people may benefit from the clarification of the regulations, and how quickly. A separate issue is that Medicare does have individual annual limits in certain areas; this settlement will not affect those benefit limits.

Non-homebound patients with multiple chronic health care conditions in the traditional fee-for-service Medicare program would be the only patients not eligible for any care coordination services. Patients with hypertension, diabetes, hyperlipidemia, hypertension, asthma, pulmonary disease, back problems, and depression are common patient profiles in the Medicare program. Yet, unless they are homebound, they are still not eligible for any type of home health or care coordination services. We still need evidence-based prevention and care coordination programs for the 90 percent of Medicare patients that are not homebound in order to further cut costs of caring for Medicare patients.

The Center for Medicare Advocacy is a non-partisan, education and advocacy organization working for fair access to Medicare and quality health care for seniors and persons with disabilities. Contact info: www.ct.gov/agingservices/lib/agingservices/manual/advocacy/centerformedicareadvocacyfinal.pdf

They have a great deal of information on their website, for example:“Settlement Reached to End Medicare’s “Improvement” standard at www.medicareadvocacy.org/hidden/highlight-improvment-standard/

For a summary of the case, see www.medicareadvocacy.org/2012/11/01/jimmo-v-sebelius/

For self help info, see www.medicareadvocacy.org/take-action/self-help-packets-for-medicare-appeals/

The Parkinson Foundation study which provided key evidence for plaintiffs:

“What Medicare Will Cover Even if You’re Not Likely to Get Better.” Ron Lieber, October 26, 2012. www.nytimes.com/2012/10/27/your-money/health-insurance/medicare-expected-to-pay-more-costs-of-chronic-conditions.html?scp=2&sq=Medicare+cms&st=nyt

Medicare limits how much it pays for a patient’s medically-necessary outpatient therapy services in one calendar year. These limits are called “therapy caps.” For specific examples, see their booklet “Medicare Limits on Therapy Services” at http://www.medicare.gov/Pubs/pdf/10988.pdf Note: CMS says this information only applies to patients with “Original Medicare,” not to Medicare Advantage Plans (e.g., an HMO or PPO) and recommends check with the plan for information about their coverage rules on therapy services.