Unit 7 members bring smiles to the children of Uganda

MNA member Dianne Hinckley and her unionized colleagues at Northeast Residential Services (NRS) in Danvers, have long known the true meaning of caring for those in need. As part of their daily work for the commonwealth’s Department of Developmental Services, they help adults with intellectual disabilities live their best lives possible—a charge that could involve anything from providing clients with complicated medical care and occupational therapy, to overseeing their general mental health and quality of life if they are living in a group home setting. 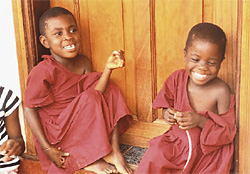 As is the case with so many skilled medical professionals who care for those most in need, Hinckley and her colleagues never seem to “hang up their caring hats” at the end of a work day. Instead, they bring that same level of compassion to others outside of their professional lives, even if that means getting on an airplane and travelling more than 6,000 miles to Uganda.

A journey of 6,839 miles
In 2008, two of Hinckley’s colleagues, Malé Kamya and Stephen Kasirye, arrived at work with photos that were less than typical: not a family vacation or holiday photo in the bunch. Instead, their pictures featured children and teens who had wide smiles despite their oftenbleak surroundings. 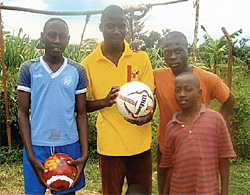 Kamya and Kasirye had just completed a philanthropic project on behalf of the Father Christmas Project—an effort that involved travelling to Uganda to help children in need.

Uganda is a nation that sits in the heart of sub-Saharan Africa and lies astride the equator. “One look at those pictures,” said Hinckley, “and the rest of us decided we needed to support their good work at a whole new level. In a nutshell, we wanted to go on the next trip and help in person.”

In a country where nearly half of the population is younger than 24 years of age and the average life expectancy is just 48 years, the good work that NRS’s Unit 7 members wanted to provide would go a long way. “From the terrifying reign of Idi Amin to the devastation that the AIDS crisis brought to the region, Uganda is a country that has weathered storms that U.S. citizens can’t even imagine,” said Hinckley. “And, in the midst of all of this, many of the nation’s children were often left parentless. We wanted to help those children.”

Thus, inspired by their colleague’s first trip, a larger group of Unit 7 MNA members at NRS began working together to support another trip to Uganda.

Simple gifts
The NRS group—which included administrator Kathryn LaPlante, RN Vanessa Jerry, OT Brooke Braaten, psychologist Keith Rando and student intern Kathryn Morse—quickly dug in and started planning and raising funds. After collecting nearly five thousand dollars and then purchasing and organizing a limitless array of supplies, Hinckley and her colleagues were ready for the trip of a lifetime. “Malé and Stephen had established relationships with five orphanages in Uganda, so we had a working list of kids’ needs as well as the orphanages’ various needs,” Hinckley said. “We had medical supplies, school supplies, clothing, food and a collection of sporting good items packed into 27 oversized travel bags,” Hinckley described.

After 17 hours of air travel, the group stepped off their KLM Royal Dutch Airlines flight and began visiting the orphanages and children for whom they had packed. “These kids, all of them, were sweet, considerate and eager to learn,” Hinckley commented. “And they appreciated everything that we gave them, even if it was as simple as a pencil.”

Hinckley went on to describe one of the group’s most memorable moments. “We visited one orphanage with our bags in tow, but we also had a pair of soccer nets ready for assembly in the back of our vehicle.” She described how the group worked with the children to put the nets together and how, immediately after, a soccer game got underway.

“The kids had a blast, and we had a blast playing with them,” Hinckley said. “But later on, when it was time for us to leave, we noticed that the kids were bringing the nets back to our vehicle. They had not realized that the nets were theirs to keep. What a gift it was to see their excitement when we explained that their soccer game could continue.”

Coming home, looking ahead
After returning from their 2009 trip, the National Resistance Movement (NRM)—the political party of Uganda—honored the Father Christmas Project and its Unit 7 supporters at its black-tie gala in Boston. Ugandan officials and dignitaries expressed their gratitude for the group’s selfless work and dedication; and the group assured the NRM that their good work would be ongoing. Since then, the group has continued to raise funds, expand its relationships on the ground in Uganda, and to plan for another trip in early 2011.

To learn more about the Father Christmas Project, contact Jennifer Johnson via e-mail at jjohnson@mnarn.org.