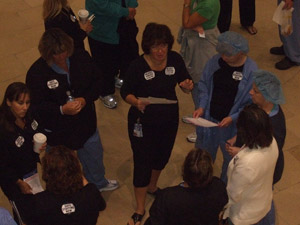 In response to a recently announced plan to implement a policy that would allow nearly all nurses at Tufts Medical Center to float to cover for chronic staffing shortages on other units, the MNA local bargaining unit staged a silent protest this week in the highly trafficked lobby of the medical center, which was attended by more than 100 nurses dressed in black scrubs, affixed with stickers that read “Reject forced Floating,” and “Safe Staffing Now.”

The protest occurred just prior to an open forum for hospital staff held on Monday by the hospital’s Chief Nursing Officer Nancy Shendell-Falik. As part of the protest, a dozen star-shaped black balloons were delivered to Shendell-Falik at the forum. The card with the balloons read, “Mourning the death of safe patient care at TMC”.

Nurses were outraged to learn of the plan, introduced to the nurses’ MNA negotiating committee last week, which would essentially allow the hospital to ask any nurse to float to another unit at any time, which not only is in direct violation of the nurses’ union contract, but also compromises nurses’ ability to provide safe nursing practice. The nurses immediately began to raise concerns about the plan, and a flyer was circulated by the union detailing the nurse’s concerns. Click here to view the flyer.

The union told management that the appropriate place to raise this issue is at upcoming union contract negotiations, where the parties would have the obligation to negotiate the policy, and nurses would have the right to strike if they didn’t agree with it. Whatever the hospital’s decision on the plan, the MNA will address the issue during it negotiations, along with a host of other concerns related to poor staffing conditions and deplorable working conditions at the hospital.

Shendell-Falik’s misplaced floating plan is just the latest in a series of decisions the hospital has made that have angered the nursing community, including the decision a year ago to institute a new “model of care” at the hospital, which consisted of increasing nurses’ patient assignments on most floors, while failing to provide necessary support staff. Last February, several hundred nurses picketed outside the facility to protest the staffing cuts.

What was once one of the better staffed hospitals in the city of Boston, if not the state, is now one of the worst staffed hospitals. In fact, over the 12-month period since the staffing cuts were implemented, nurses at the hospital had filed 328 official reports of unsafe staffing conditions that threatened the nurses’ ability to deliver quality patient care. The hospital neglected to post its new staffing plan on the hospital association’s “Patients First” web site, so the public couldn’t compare its staffing plan to other hospitals in the area.

“We are saddened and appalled at the hospital’s total lack of regard for nursing practice and the quality of care our patients receive,” said Barbara Tiller, RN, chair of the nurses’ bargaining unit. “Since management refuses to listen to us, we are taking all necessary steps to make sure our voice is heard. We feel we have exhausted every means of resolving the unacceptable changes the hospital administration has implemented. We are being forced to take these measures, because our patients and our licenses are on the line.”