On Aug. 4, the U.S. Senate, in a procedural vote and after several attempts, successfully moved legislation to provide Massachusetts with over $700 million in federal funding for the FY11 budget year. This funding, known as FMAP (Federal Medical Assistance Percentages), provides states with additional dollars for various health care and social service programs. Originally part of the federal stimulus package which has saved millions of jobs nationwide, the FMAP funding at issue in this vote would have continued enhanced reimbursements from January through June 2011. The bottom line: $655 million for health care, education and local services in Massachusetts. This money will help prevent layoffs of MNA members in the public sector, and preserve funding for hospitals all across the commonwealth. 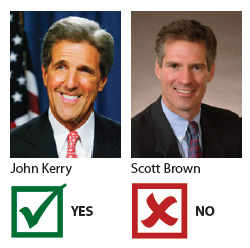 A YES vote on August 4 was a vote to bring more dollars to Massachusetts. A NO vote was a vote to prevent those desperately needed dollars from flowing to the commonwealth.

How did YOUR U.S. Senators vote?