Patrick signs bill to stiffen penalties for those who assault nurses 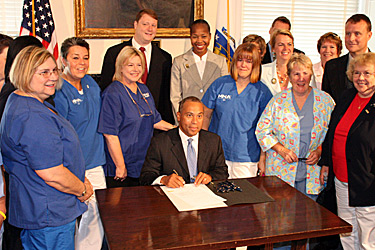 Surrounded by registered nurses and legislators, on July 2 Gov. Deval Patrick signed into law a bill that will stiffen the penalties for those who assault nurses and other health care workers, one of a series of measures the MNA proposed to address the growing problem of workplace violence in health care settings. The signing followed unanimous votes to approve the measure in both chambers of the Legislature.

“This law gives us the tools to further protect the many health care professionals who work tirelessly to ensure the care of all residents of the commonwealth,” said Patrick, who signed the legislation at a ceremony attended by two dozen MNA members inside his State House office.

“We applaud the governor and the Legislature for its support of this measure, as it recognizes the increasing levels of violence that nurses are facing on the job,” said Donna Kelly-Williams, president of the MNA. “In fact, nurses are assaulted on the job to the same degree as police officers and prison guards, and earlier this month the Joint Commission, which provides accreditation to health care providers, issued an alert to the health care community specifically highlighting a dramatic rise in the level of violence in our health care system.”

State law already treats any assault on an emergency medical technician while the technician is providing care as a more serious crime with its own set of penalties. The new law, which was sponsored by Sen. Michael Moore (D-Millbury) and Rep. Michael Rodrigues (D-Westport), extends those same protections to nurses.

A June 2008 study showed that workers in the health care sector are 16 times more likely to be confronted with violence on the job than any other service profession. A study by the Emergency Nurses Association in the spring of 2007 found that more than half of emergency nurses reported experiencing physical violence on the job. In a 2004 survey of Massachusetts nurses, 50 percent indicated they had been punched at least once in the last two years, and 25-30 percent were regularly pinched, scratched or spit on or had their hand twisted. Yet most hospitals and health care employers in the state fail to adequately address the issue of workplace violence and very often provide little or no support to employees who are attacked on the job.

“This is a day that we have been working towards for some time, and I am very proud to see it come,” said Moore. “This bill, which has been filed every session for six years, will lead to corrective action being taken against those who would harm a nurse on the job, and it will communicate to the public and the medical community the severity of this problem.”

“I applaud Gov. Patrick for joining us in sending a message that violence against nurses and other health care professionals cannot and will not be tolerated,” said Rodrigues.

The bill passed both chambers of the legislature and was signed by Patrick after a year of intensive lobbying by MNA members. Members attended small meetings with over 20 legislators in their districts, regularly went to the State House to drop off literature, participated in a March 31 lobby day, and generated hundreds of phone calls to the governor as soon as the bill reached his desk. It was this grassroots advocacy by MNA members that resulted in such overwhelming support for the measure.

According to Kelly-Williams, the new law is an important first step in a broad-based effort to make health care settings safer for nurses and for patients. “As we celebrate today’s achievement, we also continue to push for two other measures that we hope the Legislature will act on to fully address this crisis. This includes a much-needed law that calls upon health care providers to put in place policies and procedures to prevent workplace violence from occurring in the first place. We also continue to seek passage of legislation to set safe patient limits for nurses, as the lack of staff to adequately respond to patients and their families is a major factor leading to these types of incidents.”