H1N1 report: looking back, thinking ahead 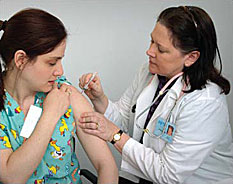 With the onset of this past calendar year’s flu season and the alarming news that swine flu was likely to spread to pandemic proportions, the health care community and the media told

U.S. citizens to take the situation seriously and get vaccinated. But the vaccination process was slow to get moving for many reasons, resulting in numerous stops and starts that frustrated both the public and public health nurses.

Each clinic varied in its procedures to dispense medication but each clinic’s goal was the same: to vaccinate as many people as possible. Some clinics were more successful at accomplishing that goal than others. The clinics were available if the public wanted the medication; it was up to the public to receive it. The goal of reaching as many children (school age, preschool, and babies over 6 months) as possible was realized.

When it was first announced that children were going to be vaccinated, school nurses, as well as other RNs and LPNs, balked at the thought of actually dispensing the medication to the children. As many of the nurses had no actual pediatric experience, they perceived dispensing medication to this group as being a daunting task. After the Massachusetts Department of Public Health provided vaccination review courses, attitudes changed and everyone seemed to step up to the plate to accomplish the goal of getting the children vaccinated. Clinics were held at schools (some identified as emergency dispensing sites), boards of health offices, town halls, etc.

The DPH clearly stressed there would be no liability, as long as protocols were followed and participants in the clinics were trained in their respective roles.

One major problem I observed at one town clinic (while I was there for Medical Reserve Corps recruitment) was the lack of protocols. The town did not use its public health nurses, but used a local doctor’s office personnel to vaccinate. These nurses did not follow the protocol. There was no screening mechanism available, either before forming dispensing lines, or at the actual time of vaccinating. The public was never asked about whether they felt well or ill; or if they had allergies to eggs, etc.; or if they had ever had reactions to previous flu vaccines. The nurses, when questioned about the standing orders (from the DPH), were not familiar with those protocols. When this was mentioned to the board of health director, the response was, “There is no liability.” The need to follow protocol was reiterated.

Other variations: gloves to syringes

Wearing gloves was encouraged when dispensing the nasal vaccine due to the risk of vaccine on opened skin that could burn. Again, this was a guideline and not a requirement.

TB syringes with 1¼-inch needles worked well; they were easier to fill, expel air from and to vaccinate with. Some clinics made ⅝-inch syringes available, but most did not. These smaller syringes would have made vaccinating thin people and children less traumatic.

A simple item like a Band-Aid also caused problems. Most nurses did not realize that the Band-Aid needed to be pulled apart from each end instead of tearing it open and trying to remove the Band-Aid, which took unnecessary time. This issue was eventually dealt with by including it in the just-in-time training.

Which vaccine and how to screen

Some clinics had seasonal flu vaccine on the same table with the H1N1 multi-dose vial injectable vaccines. Other clinics had separate stations for seasonal flu vaccine, pregnant women needing pre-filled vaccine, families with children under a certain age, families with children over a certain age, nasal vaccine, and adults. By setting up the different stations, it was easier to perform just-in-time training for the nurses who were not as familiar with the specific administering procedures.

The screening process varied greatly among clinics, from more to less information. In some clinics, the only screening performed was by the vaccinator following protocols for side effects, contraindications etc, which did not take any more time for the vaccinator. As people took off jackets and pulled up sleeves, the necessary questions were asked and answered.

One clinic used paramedics as vaccinators and felt that worked better than using nurses. The health agent stated, “The nurses wasted time by re-screening prior to the vaccination.” (There were several instances where re-screening at the time of administering the medication resulted in different answers in many clinics.)

Just-in-time training was performed to show vaccinators where to administer the shot, as several vaccinators were administering the vaccine too low on the upper arm.

Many vaccinators were reminded frequently to shake vials as well as the syringes that they had previously filled. Many did not know this as the standing orders had not been reviewed or the vaccinator did not read the information.

One town, in particular, had a screening process where an RN and the director of medical services for that town screened and determined who would receive the nasal (due to the restrictions) or the multi-dose vial. As a result, and the lines grew shorter at other clinics.

Having participated in 16 H1N1 clinics, I was amazed to see how each clinic functioned to accomplish the same results. The procedures for the clinics varied as much as the people varied from town to town.

It was good to see the emergency dispensing sites being utilized. Due to the delay in the arrival of the vaccine, plans for clinics were already set up and ready to go. When the vaccine did arrive, however, there was a rush to get the public vaccinated as quickly as possible, and last minute changes and training had to be altered.