Concessions: What are they good for? Absolutely nothing!

The U.S. economy is in the midst of recovering from one of the worst recessions since the Great Depression. Many are still unemployed or underemployed, with the official unemployment figure for January 2010 at 9.7 percent. With this as a backdrop, many employers are using the down economy as an opportunity (excuse) to demand that workers open labor contracts and to force concessions. This is always framed as a way to “save jobs” and prevent the business from collapsing. 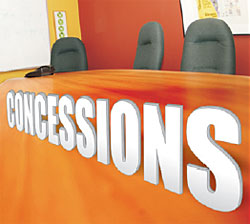 We have seen this occur recently in a number of the hospitals where the MNA has contracts. At Cooley Dickinson Hospital (CDH), last fall the employer asked the union to open the contract right in the midst of a three-year contract (the current collective bargaining agreement expires in January 2011). The hospital was unabashed in its attempt to have the nurses open their contract for the sole purpose of cutting benefits and wages — concessions! One has to ask, “When is a contract a legally binding contract?”

The union researched the hospital’s finances and found that it was having a banner year of “excess” (read, “profit”) of $8.9 million for the last fiscal year. Therefore, there was a real question about why the employer was asking for concessions and threatening layoffs.

When confronted with this annoying fact of being comfortably in the black, hospital CEO Craig Melin did not deny it but only feebly offered that it was a “rainy day fund” and then defended the surplus as necessary for the hospital’s financial stability. The nurses subsequently conducted a large informational picket outside of the hospital and management did not continue to push the union to open the contract.

The bargaining unit chair at CDH, Sally Surgen, summarized it best, “If the reverse were true and the hospital had a $30 million surplus, and we came back asking for more money they’d laugh at us.”

When it comes to concessions and the need to open contracts, things only seem to work one way: from the top down.

This case is not an isolated one by any means. Hospitals often approach the union, hat in hand, looking for givebacks. The story is usually the same. The hospital is in financial trouble; the contract is too rich; the union needs to show some good faith to help the hospital; everyone has to share the pain; cuts are needed to avoid layoffs … and on and on.

Yet historically, a review of many unions over the years who have granted concessions in benefits and wages in hard-fought contracts show that the promise of saving jobs almost never occurs. Concessions simply do not work and do not produce the intended results. Most often, they are simply an attempt to take advantage of the workers by slashing their pay, benefits, time off, etc. This often occurs while the top officers (CEOs, CNOs, COOs, CFOs, etc.) do not “share the pain” in the least. While the U.S. economy tanked, the very same people that caused the crash rewarded themselves with obscene bonuses with taxpayer bail-out money!

A seminal study of concession bargaining written in the 1980s, (Concessions and How to Beat Them, by Jane Slaughter) makes the case that when workers engage in concession bargaining they often are simply financing their own future job loss. Slaughter lists numerous companies that closed despite huge concessions from the workers, including Braniff Airlines, Youngstown Steelworks, Motor Freight Express, Akron General Tire and Dubuque Plant. Some of these companies closed despite promises from management to stay in business once they became profitable again—which they did. The workers lost their pay and benefits and then lost their jobs in the end anyway.

Kim Moody, author of “Concessions: From a Bailout to a Tidal Wave,” wrote about the famous government bailout of Chrysler in 1979 that resulted in the near canonization of Chrysler CEO Lee Iacocca. Moody makes the point that the “concession agreement was more of a political act than an economic act” in which the union agreed to freeze wages six months, surrender six paid holidays and defer pension increases. After all that, management demanded additional concessions worth $673 million a year later.

Few believed that these concessions would “save” the respective businesses. But Chrysler’s approach undermined the United Auto Workers’ history of successful pattern-bargaining among the auto manufacturers and it led to a rapid spread of concession bargaining across industries including not only Ford and GM, but also the steel, airline, meatpacking, trucking, grocery, rubber and public employment industries.

Moody observes that in a survey conducted at the time by Business Week of 400 corporate executives, fully 19 percent of them said “although we don’t need concessions, we are taking advantage of the bargaining climate to ask for them.”

While this may seem like decades old history, we are seeing the same pattern emerge as hospitals take advantage of the poor economy to force concessions. These may also take subtler forms that normally are not identified as “concessions.” These include cash bonuses instead of across-the-board increases; multitiered systems for pay and benefits; work-rule concessions; short staffing; redesigned work; furloughs; and the ever-popular labor/management team concept (Magnet).

Often these are designed to further control the workforce and overshadow the services nurses provide, namely quality patient care. The Boston Medical Center and Tufts Medical Center nurses conducted informational pickets on the same day in February to protest the hospitals’ plans to short-staff as a cost savings mechanism. This, while Tufts CEO Ellen Zane received a $1.9 million salary and the outgoing BMC CEO received a $3.5 million bonus. Abe Lincoln comes to mind again!

The current concession trend has also led to attempts to break long-standing master contract agreements in various industries (Delphi workers in Michigan, Indiana and New York for example). In the midst of all of this, nurses are looking to create such master agreements to maximize unity and strength.

This is a threat to the health care industry and we can expect employers to react in-kind: with threats of layoffs or concessions.