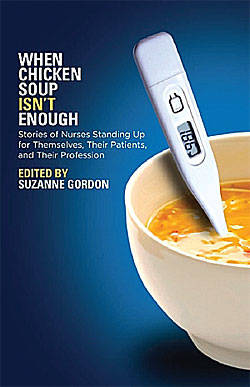 Suzanne Gordon, a longtime friend of the MNA and a tireless advocate for nurses, recently published a new book When Chicken Soup Isn’t Enough: Stories of Nurses Standing Up for Themselves, Their Patients and Their Profession. The book is a collection of 73 stories of nurses from all over the world — nurses who know what real advocacy means and who are both an example to and reflection of nurses everywhere.

Gordon is an award-winning journalist and author. She has written for the New York Times, the Los Angeles Times, the Washington Post, the Atlantic Monthly, the American Prospect, the Globe and Mail, the Toronto Star and others. She has also been a health care commentator in the U.S. for CBS Radio News and Public Radio International’s “Marketplace” business program, and a popular lecturer.

David Schildmeier, the MNA’s director of public communications, recently spoke with Gordon about her latest book.

Why did you decide to write this book?

Ever since I first checked out the Chicken Soup for the Nurses Soul books, I was concerned about their underlying message to RNs. While I understand that these books are intended to celebrate nurses, I was concerned that they were celebrating some of the wrong things and ignoring some of the right things. Over and over again, I would think, what about a book called, When Chicken Soup Isn’t Enough. But I kept the idea on the very, very back burner until a couple of years ago. I was having lunch with a group of nurses—academics, workforce researchers, union reps, and staff nurses—who were lamenting the fact that nurses were so easily silenced and silent. I mentioned the Chicken Soup for the Soul books and suggested that they inadvertently reinforce nurses’ silence. “I’d like to write a book called When Chicken Soup Isn’t Enough,” I said. To which everyone at the table replied, “what a great idea. Do it!” So I did.

So what is the book about? Who are the authors?

The theme of this book is genuine patient advocacy. Not patient advocacy defined as “I hope things go well for patients,” but patient advocacy as these authors describe it – doing something to assure that patients are safe and well cared for. I am the editor of the book, its catalyst and facilitator. And I do have to admit that I did a heck of a lot of work getting the essays together. But this book only exists because 73 nurses from around the world took the time to either write an essay or allow me to interview them and then help them write that essay. Most of the nurses are from the U.S., six from Massachusetts, but the book has stories of nurses from Iceland, Sweden, South Africa, Canada, Australia and many other countries. Their stories describe what happens when nurses assert themselves either as individuals or collectively. They are stories not only of empowerment but of the hidden—and sometimes not so hidden—power of nurses and nursing.

There are three MNA members in featured in the book. Who are they and what do their chapters focus on?

Penny Connoly, Karen Higgins and Charlene Richardson have written stories for the book. Penny’s focuses on the role nurses played in the successful fight to save the Carney Hospital. Karen’s describes her evolution as an advocate in the fight for safe staffing. Charlene describes being attacked by a patient at work and what happened when she got no support from her hospital following the assault. She thus began to advocate for legislation to protect hospital workers from such assaults.

Can you describe what you think these nurses have in common?

One of the things all these nurses share is a simple fact of life. Which is that no matter what you have achieved it’s usually because, in small ways or large, you fought for it. And no matter what you have won, you have to continue to stand up if you are to maintain your gains. When I say fight, I don’t mean going to the barricades or getting into verbal fisticuffs. Sometimes nurses have had to pull out all the stops. But many times, simple persistence is the battle. Sometimes nurses fight by stealth. That’s why the title has the words “standing up” in it.

The title argues that nurses have to stand up for themselves.

Absolutely, and that choice of words was very deliberate. Nurses are always told they have to stand up/advocate for their patients. But they are often told that they should sacrifice themselves in the process. I believe nursing involves a certain dose of self-sacrifice. But you can overdose on sacrifice and, in the process, harm not only yourself but patients as well. Exhausted, stressed out, injured, irritated and frustrated nurses cannot function at their peak. So nurses need to tell us not only what patients need but what they need to fulfill their mandate as patient advocate.

What do you hope nurses will do with this book?

I hope they will use it as a tool and make it a kind of mantra. Chicken soup is not enough. I’m Jewish, so when I have a cold, it’s great—particularly when it’s got lots of garlic in it. But comfort food is not always the Rx. The very act of standing up, even if you don’t win, can sometimes make you feel even better. Plus, it gets real results.