Reports from the field: MNA members help to heal those in Haiti

Since January, MNA nurses have volunteered in huge numbers for relief work in Haiti, including delegations, pairs and individuals from the Boston teaching facilities, the Caritas network hospitals, several Worcester-area hospitals, Mercy Medical Center, Lawrence General and many other MNA facilities.

The time, care and skills that each of these nurse volunteers shared with the people of Haiti has been both celebrated and appreciated, and their work and efforts made an immediate difference in those who were in such desperate need of medical care

More than 12,000 nurses have volunteered on the National Nurses United’s RNRN Web site, and the MNA and NNU have been working to match volunteers to Haiti’s local needs based on skills, experience and availability.

Betty Sparks, an MNA member and OR nurse working at Newton-Wellesley Hospital, departed on Feb. 1 for Haiti as an International Medical Surgical Urgent Response Team (IMSURT) vounteer. This team operates under the jurisdiction of the National Disaster Medical System, the Office of Homeland Security and FEMA.

Sparks is the chair of MNA’s Emergency Preparedness Task Force and a former MNA Board member. One of her first dispatches to the MNA follows. 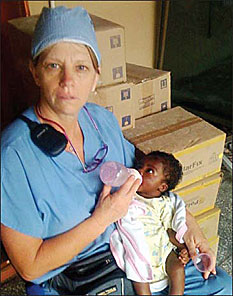 Date: Feb. 7 Here for a week so far and seeing many patients with wound infections and fractures who are in need of dressing changes and reassessments of their external fixations devices. We are seeing so many of those.

Things here are unimaginable in terms of where and how we are caring for patients although, at the same time, everyone is doing amazing work that is making a tremendous and immediate difference. We are putting external fixation devices on fractured distal femurs while swatting flies off the sterile back table.

It has been common to see patients with gastroenteritis and respiratory ailments, and we have done some pregnancy checks as well. We have also treated a few gunshot wounds.

In terms of my surroundings and lodging, I am sleeping on a cot outside under a tin roof covered with mosquito netting. We are eating MREs—meals ready to eat—and drinking warm water. We bathe in outdoor shower tents with cold water, but it feels great as it has been 90 degrees here. We have hit on an ingeniously simple system for doing our laundry: We wash everything while we are in the shower and then we just hang everything out to dry.

We have a bathroom, but if you need to flush, you have to refill the tank with the water runoff from our outdoor sinks where we wash up. No drinking or brushing your teeth with that water though! We use bottled water only, and then we cut the bottles in half and use them as coffee cups.

One of the most entertaining moments though was when, after drinking warm water for more than a week, the U.S. Embassy sent us frozen Gatorade in med containers!

But forget the flies and frozen Gatorade: this experience is truly rewarding.

Mike Savoy is an MNA member and nurse at Brigham and Women’s Hospital in Boston. He traveled to Haiti with several friends and colleagues as part of NGO, Partners in Health.

As I stepped through the door of the vintage 707 that had ferried us from Miami to Port au Prince, I was struck by a blast of air so hot I was nearly knocked off my feet. I looked out on the tarmac taking in the seeming chaos. The international relief effort evolving over the airport grounds was overwhelming: helicopters and aircraft of every sort and from all nations, trucks, and lines of people, jet engines screaming, and the pungent stink of exhaust and the shouting of commands. In the near distance, vast makeshift tent cities and the ruins of Port au Prince with streams of traffic winding through its streets.

Immediately after the quake that devastated Haiti on Jan. 12, nurses nationwide volunteered to help. I was one of them. By Jan. 28 I was given word that I would be part of a medical team to be dispatched to the now completely overwhelmed 100-bed St. Nicolas Hospital in St Marc, Haiti. The city lies 50 miles north of Port au Prince with a population of roughly 250,000. At its center, the population is roughly 60,000-80,000 people but since the quake, no one knows for sure. On Feb. 3 we were in the air en-route to a nation of people in need.

Our affiliate NGO, Partners in Health, decided they would rotate in MD and RN teams consisting of trauma, surgical, orthopedic and reconstructive-plastics, to augment operations already in place in St Marc.

Having left a devastated Port au Prince, hundreds of desperate patients seek treatment at St. Nicolas, many rest on stretchers or mattresses on the floor. Doctors and nurses zigzag from one patient to another. The turmoil at St. Nicolas was tempered by the nurses there before us, pathfinders like NPs Annie Lewis and Ed Arndt and OR nurses Cheryl Grove and Deb Pitts. Our teams built on existing Haitian systems that before the quake were seriously deficient and difficult. 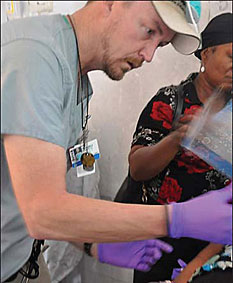 When we arrived, the hospital was flooded with all manner of ill and injured. Thankfully, our group overlapped the team that had been in Haiti before us, so much of the difficulty of organizing had been eased.

We quickly prepared the surgical teams, scheduled cases and disbursed nurses throughout the hospital wards to help the Haitian nurses care for their overwhelming patient loads. Dressing changes were scheduled, the more complex to be done in the OR, the rest on the wards. A much needed trauma room was organized in the emergency ward. We gained trust from the staff and, more importantly, from the patients.

The conditions of the facility, the earthquake victims and the poverty in the area are all challenges we faced acutely in St Marc. The nurses and physicians of our team worked tirelessly to help these patients, their families and our Haitian peers. Moving forward, solutions will be needed that are inspired by the Haitian nurses in order to create the kind of hospital they want for their future—solutions that work for them.

We arrived home Feb. 14, tired and dusty, but satisfied that we had made a difference. There is so much to tell of Haiti. So much poverty, sadness, maddening bureaucracy, violence, disease and death. Yet there is such love there, deeply rooted religious beliefs, song, hope and potential. The nurses on our team did countless remarkable things, subtle yet profound things, and they touched numerous lives. We did what we could, what we do best. We are, after all, nurses.

Kathy Reardon (below, right) is an MNA member and nurse at Caritas Norwood Hospital. She traveled to Haiti with several friends and colleagues from within the Caritas network. Her employer was one of the area’s first to organize and support an independent, internal volunteer program. Her dispatch is based on an interview she participated in at MNA headquarters shortly after she returned from Haiti. 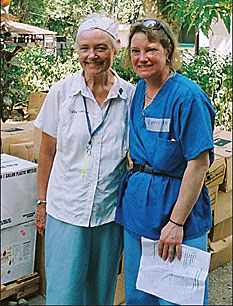 Kathy Reardon knew almost immediately that she wanted to assist the people of Haiti by going there to help the sick and wounded. It just so happened that her employer, Caritas Norwood Hospital, was on the same page.

“This whole process moved fast for us,” Reardon explained. “Hospital management got the ball rolling and set up an internal system that allowed us to volunteer our time. We just needed to get our paperwork, medical records and family situations in order; they handled getting our shifts covered.”

According to Reardon, the day after she got her passport Caritas pretty much said, “So are you ready to go?” Her travel-related vaccinations, however, were still outstanding

— although that did not take much time to get squared away either. “Two days after we were vaccinated, we were on our way to Haiti.”

She traveled with several colleagues but also with one of her closest friends from Norwood, Pam Reilly. Together, they landed in Cap Haitien. And together they carried their small personal bags and more than five large boxes of donated medical supplies to a small vehicle that was to drive them to the village of Miloto.

“The crowds were overwhelming,” Reardon recalls, “and the dirt road that we needed to take to get to the village was barely passable.”

Have you helped in Haiti too? Let us know: mnainfo@mnarn.org

They were headed to the village’s only hospital, Sacre Coeur, which is part of a missionary program that Caritas supports. According to Reardon, the village was not damaged in the earthquake and it was safe, but, like the rest of the island, it had no infrastructure. To make things more difficult, people from all over the island were travelling to Sacre Coeur for medical treatment, shelter, food, safety or to find loved ones who may have been admitted after the quake.

“People were just walking … walking to any safe village where they thought they might be able to find help,” Reardon explained. “And there were other folks who were so injured that they were brought in via helicopter.” To put it differently, the hospital was not just at capacity. It was teeming with the sick, the injured and their families.

“All those people in a hospital that was so small that it could easily fit inside the MNA’s second floor open office area,” Reardon added. “And each room held between 20 to 25 people, for a total of more than 300 patients. We pretty much just dropped our bags, put on our scrubs and went to work.”

Reardon and other volunteers at Sacre Coeur started seeing patients immediately, and they instantly saw common injuries in their patients: amputations, secondary wound infections, open sacral wounds, DVT, and bone injuries that required external fixation devices. “It was hard, exhausting work that was physically, emotionally and mentally draining,” said Reardon. “But it was truly rewarding work.”

When asked about her best and worst moments, Reardon pauses momentarily and then answers the questions with ease. “I watched one little girl who had suffered a terrible crush injury get up and walk within 24 hours of arriving thanks to the wound care and PT she received,” recalled Reardon. “When I saw her last she was sitting outside in the sun … smiling.”

Reardon could also recall her most difficult moment with ease. “We treated an older man whose arm had been amputated, and he also had a skin graft. He was doing well, so his son asked when they would need to leave. He was asking because they had nowhere, absolutely nowhere, to go.” She went on to describe her next thought. “I kept thinking, ‘He’s over the hump in terms of the medical crisis … but what’s really next for him?’”

As she was preparing to return home 10 days later, Reardon was able to be hopeful about the answer to her own question. “The people of Haiti are resilient, and the world is paying attention. I will be optimistic.”

The work in Haiti is ongoing, so contact the MNA at 781.830.5743 or via massnurses.org for details on how to volunteer.

The MNA’s Emergency Preparedness Task Force is also continually working to provide any needed emotional support to nurses who are returning from Haiti. If you are interested in joining this task force, contact Mary Crotty at mcrotty@mnarn.org or 781.830.5743.