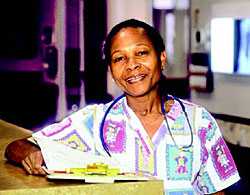 MNA member Nicole Jean-Louis, RN, a nurse with the Cambridge Health Alliance has been named the EMS Nurse of the Year by the Metropolitan Boston Emergency Medical Services Council. The award, which honors a nurse who has contributed in a significant way to the development of EMS skills, efforts and education within the greater Boston region, was recently presented at the ninth annual EMS awards ceremony at American Legion Post 440 in Newton.

Jean-Louis joined Cambridge Health Alliance in 1987 and has served as a nurse at CHA’s Cambridge Hospital emergency department (ED) for more than 10 years. She is an integral component of an ED which ranks among the best in the state for reportable quality measures.

In addition to her daily duties providing a high standard of care for all patients treated at the ED, Jean-Louis is a nurturing teacher who plays an active role engaging and educating EMS providers. She is an exceptional resource for paramedic students during clinical rotations at the Cambridge Hospital campus as well as a noted preceptor for second- and third-year nursing students at CHA.