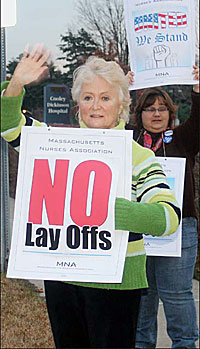 Why Is Cooley Dickinson Hospital/VNA threatening layoffs after showing $8 million in profits?

In the last fiscal year Cooley Dickinson Hospital has shown a profit of $8 million. As its budget year ended on Sept. 30, the hospital surprised MNA bargaining units at the hospital and the Visiting Nurses Association by requesting that their contracts be reopened due to financial problems. After both of the bargaining units declined to reopen the contracts, the Cooley Dickinson CEO put out a letter to the employees claiming that there would be layoffs and blaming the MNA nurses.

“We sat at the table for over a year hammering out a contract which we signed in good faith last March,” said hospital co-chair Sally Surgen, RN. “After this long and difficult process we were very surprised at the request to reopen, and were incredibly disappointed when the hospital blamed us for the possible layoffs. We still don’t understand just why they think there is a need for layoffs after showing a profit of more than $8 million as of the first of October.” Surgen says the staff nurses are insulted by management’s attempt to divide the hospital workers. “It is clear that by blaming the RNs for the hospital’s alleged fiscal problems they are trying to divide the workforce and create a hostile work environment. We have been heartened that most of the other hospital workers haven’t bought into the hospital’s lies.”

Even more surprising to the nurses was that management issued their call for concessions after abruptly ending discussions on the formation of a multi-employer/union joint pension plan. The MNA made this offer to the hospital in order to preserve the defined benefit pension coverage and in our analysis to save the hospital money they would otherwise be required to spend under the Pension Protection Act. “We felt management was open to our proposal for the pension, and that the discussions were progressing, until management unilaterally broke off the talks,” said Surgen.