A turning tide for the next generation 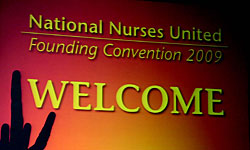 For a moment, I almost had to hold my breath. I could almost feel my heart skip a beat as the room erupted in cheers. A chill shot up straight from my toes to the tips of every follicle on my head. I veered around the room—watching old friends and new friends embrace each other in utter exasperation. Some were clapping. Some were cheering. But it was those who were crying which truly made me understand how powerful this moment was in our history. The National Nurses United was born.

At this current moment, labor has been at one of their most divided times in U.S. history. In the last few years unions broke off from the AFLCIO to form Change to Win—and now even the existence of Change to Win is in question. With the internal divide of UNITE-HERE and SEIU’s involvement, one of the largest fractures in labor history is occurring with organizers being sent around the country to raid each others’ units. Lastly, in the west coast, the newly formed National Union of Healthcare Workers splintered from SEIU and they are vigorously at each others’ throats to claim members lost in the divide.

But amongst the turmoil in the labor movement, a new movement has turned the tide in the healthcare industry. When the healthcare debate is at the forefront of our economic prosperity and our children’s future lies within the power of labor to shift the paradigm into the proper direction—NNU is the start of this new shift.

Stewart Acuff said it best at the NNU convention, “Our nation needs this assembly. Our nation needs your unity. With so much at stake in America - with the potential possibility for historic change. With the insurance companies and hospital chains trying to hold onto their power and their profits—America needs its primary care givers to be united and to be unified by a strong voice. Power and strength comes from unity, and an agenda to return healthcare from profit making and profit taking to caring for our people. We need you! America needs you!”

As a young labor activist, I was not around to see the passage of the Taft-Hartley Act in 1947. I wasn’t able to march with Martin Luther King during the Memphis sanitation strike of 1968. What my generation of labor activists has witnessed is the continual decline of union power and density at the hands of corporate greed and globalization. The shift in the paradigm that I know of—that I have seen—is not a positive one.

And although I could take this negativity and implant myself in a labor movement of false hopes and top-down run unions, there is something inside that still makes me want to fight. It is this calling that there is a hope and an inspiration that when I talk to some of my mentors within MNA, I see that there is a better light ahead of us and I am proud that MNA has stood up to this challenge.

However, this is our time—for the fight of your generation and for the fight of mine. As I sit in bargaining sessions watching CFOs try to cut defined benefit plans out of our contracts, I can only think of the millions of dollars that these hospitals hide and pay their attorneys to negotiate these benefits away from our nurses. The deepness of these corrupted roots have more ties than we know it.

Hospitals have taken a new path to acquire wealth and power over their employees. The non-profit hospital sector has evolved into a money making scheme to obtain more wealth through unregulated channels. To be a not-for-profit hospital is to be given the opportunity to make even more money. With tax breaks and loose government reporting mechanisms, hospitals have lobbied and manipulated a system which has allowed them to amass amounts of wealth never seen before. And who gets rewarded for this—the CEOs and executives of these institutions whose salaries have gone up 400 times in the last few decades.

This past Dec. 7, I was able to personally witness one of U.S. labor history’s most powerful accomplishments in decades. The birth and formation of NNU has started a new chapter in our new labor movement. As Akoff put it best, “You need a national organizing team that can move to opportunities and answer the call of nurses. You’re forming a truly national union and American workers and nurses need you to act like a national union with a truly national organizing team. We need you to have more power! Not Tenet. Not HCA. Not Beverly Enterprises. We need you to have more power!”

For those who have paved the way to this day, I can only show my deepest admiration and respect for. NNU is exemplary of a turning tide within the labor movement to bring strong leadership and guidance to the rest of labor for the fight of our time—healthcare reform. This is your battle and this will be my battle for the next 50 years. You have created for this next generation a platform and foundation for real change in our hospitals, for healthcare reform and a new momentum for our labor movement—and I can only thank you from bottom of my heart for this. We won’t let you down.