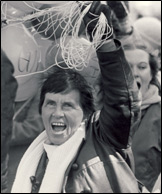 FITCHBURG, Mass -The nursing community and the labor movement in Massachusetts is mourning the loss of one its great advocates and leaders with the death of Rosemary (Bryne) Smith, 82, of Fitchburg. Smith died Sunday, Jan. 27 surrounded by her husband of 55 years, Charles Warren Smith, and her family, after a short battle with cancer.

While the nursing community mourns the loss of one of its great advocates and leaders over the last 30 years, we also celebrate a woman who greatly impacted her profession through her active and effective participation in the Massachusetts Nurses Association where Smith worked for more than 26 years until just before her death.

"Rosemary was an individual whose unbridled energy, tenacious commitment and warm hugs were woven into the very fabric of MNA. She will be sorely missed but will always be with us" said Julie Pinkham, RN, executive director of the Massachusetts Nurses Association.

At a celebration of her career and contributions to nursing hosted by the MNA in December, Smith's contributions to her profession and community were acknowledged in citations she received from State Senator Robert A. Antonioni, on behalf of the Massachusetts State Senate, as well as from Senator John Kerry.

She was born the daughter of Mary (Chapin) Bryne and Thomas Bryne of Manchester, Conn., and graduated as an RN from the New England Deaconess Hospital School of Nursing. She also received a Bachelor of Science degree in labor relations from Fitchburg State College.

Smith began her career at Fitchburg's Burbank Hospital in 1972, eventually becoming the head nurse in the intensive care unit. During her years at Burbank Smith evolved from a skilled staff nurse into a powerful union leader, serving as a fierce advocate for the betterment of her fellow nurses and the patients they cared for.

In 1982 Smith began her 26-year career with the Massachusetts Nurses Association as an associate director, where she led 225 registered nurses at Burbank Hospital in the longest strike in Massachusetts' nursing history, lasting more than six months. The Burbank nurses won national attention and praise from nurses across the nation for the strike. The eventual settlement included a 25% pay increase over two years as well as landmark contract language the nurses were seeking to provide them with better working conditions and greater autonomy in providing nursing care.

During her tenure with the MNA Smith participated in the growth of the organization and its efforts to become one of the state's most powerful voices for health improvement and quality patient care. Among her accomplishments were years of serving supporting nurses and health professionals working in state-operated facilities and agencies, supporting those caregivers in their continued efforts to create working and practice conditions that improved the care and well being of the state's most vulnerable residents, including the mentally ill, developmentally disabled and our veterans.

In recent years, Ms. Smith took on the role of Director of membership for the MNA, where she has helped to lead the organization to its highest membership in its 100 year history.

Throughout her career, Smith was a Board member and supporter of the Massachusetts Nurses Foundation, a non-profit organization that raises money for nursing scholarships. Smith was a tenacious fundraiser for the organization, personally raising thousands of dollars to support the education of new entrants to the profession she loved.

In addition to her husband, she is survived by her sons, Charles Warren Smith III and Christopher Michael Smith and his wife, Julianne (Martin) Smith; grandson, Charles Warren Smith IV; four granddaughters, Charlotte, Tia and Corrie Smith, and Deena (Smith), wife of David Wood; one great-grandchild, Delia; many nieces and nephews. She is also survived by her sister, Claranne Parker and her husband, James of Farmington, of Connecticut; half-brother, Warren Wilder of Fort Meyers, Fla.; brother-in-law, P. Michael Smith of New Bedford; sisters-in-law, Adria Smith (Sr. Mary Sharon) of Worcester and Nancy Chalifoux of Fitchburg. She was predeceased by her half-brother, Michael Bryne, and half-sister, Gertrude Wilder.

The funeral will be held on Friday, Feb. 1, from Brandon Funeral Home, 305 Wanoosnoc Road, Fitchburg, with a Mass at 11 a.m. in Saint Bernard's Church, 240 Water St., Fitchburg. Burial will be private. Calling hours are on Thursday, Jan. 31, from 4-7 p.m. in the funeral home. A memorial service will also be held on Saturday, Feb. 2, at 11 a.m. in Horizon Christian Fellowship, 356 Broad St., Fitchburg. In lieu of flowers, memorial donations may be made to the scholarship fund of the Massachusetts Nurses Foundation, 340 Turnpike St., Canton, MA 02021-2711.