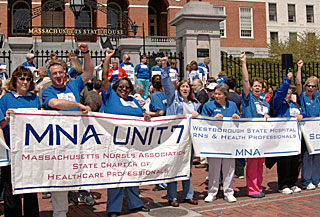 BOSTON, Mass.—Nearly 1000 nurses, patient advocates and legislators rallied at the State House today, National Nurses Day, in support of The Patient Safety Act. The rally came after the announcement that House Speaker Sal DiMasi has scheduled a vote on the bill for May 21 or 22.

Last week, the Joint Committee on Health Care Financing voted to approve the bill, which would guarantee Massachusetts patients safe RN staffing in all hospitals. The measure, The Patient Safety Act, calls upon the Massachusetts Department of Public Health to set safe limits on nurses’ patient assignments, and also prohibits mandatory overtime and includes initiatives to increase nursing faculty and nurse recruitment. The Committee voted 15 – 3 in favor of the measure, which now moves onto the House Ways and Means Committee.

The bill responds to increased concern over quality care in Massachusetts hospitals as well as evidence linking disease and deaths to poor patient oversight caused by nurses being forced to care for too many patients at one time. In recent years medical errors and hospital acquired infections have soared. Numerous studies link the rise in hospital-acquired infections and other medical complications to understaffing of nurses. For example, a report published in the July issue of the journal Medical Care found that safe RN staffing levels could reduce hospital acquired infections by 68 percent.

Meanwhile, the Massachusetts hospital industry continues to fight the bill at a time when hospital-acquired infections and medical errors are sharply on the rise. For example, the Massachusetts Coalition for the Prevention of Medical Errors estimates that 2,000 people—or six people per day—are dying in Massachusetts because of them every year.

In May 2006, the Massachusetts House of Representatives passed an earlier version of The Patient Safety Act by a margin of 133 to 20 but the bill was not taken up by the Senate. The bill is co-sponsored by State Representative Christine Canavan (D-Brockton) and State Senator Marc Pacheco (D-Taunton). “At last, we have movement on the Patient Safety Act,” said Rep. Canavan. “I am so pleased that the House leadership recognizes the merits of this bill. Let’s make this the year we finally reach the Governor’s desk!”

“We applaud Speaker DiMasi for scheduling a vote on The Patient Safety Act.” said John McCormack, the co-chair of The Coalition to Protect Massachusetts Patients. “Every day we wait for this bill to be passed, a distressing number of patients in our hospitals are suffering due to a lack of appropriate nursing care.”

Key components of the bill include the following:

To date, 130 of the state’s leading health care and patient advocacy groups have endorsed the Patient Safety Act and have joined forces to push for its passage in both the House and Senate. Recent voter surveys indicate that more than 80 percent of the public supports establishing safe staffing limits.