DNV: The first new player in hospital accreditation in 30 years

Big changes are occurring in hospital accreditation. On July 15 Congress yanked The Joint Commission’s unique “deeming” authority. That authority has allowed hospitals accredited by The Joint Commission to be eligible for reimbursement by Medicare. The term “deeming” signifies that a hospital is deemed to meet Medicare’s “conditions of participation,” which lay out the reimbursement rules hospitals must play by. 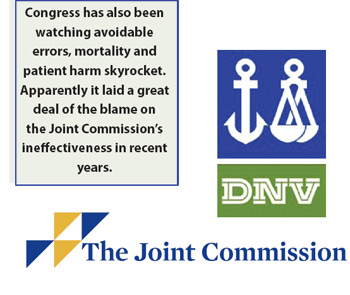 Two months later, on Sept. 25, Medicare granted deeming authority to a new player on the scene, DNV Healthcare, Inc. DNV is the first new hospital accreditation organization to be granted this authority in the U.S. in 30 years.

Apparently Congress has also been watching avoidable errors, mortality and patient harm skyrocket, and it apparently has laid a great deal of the blame on the Joint Commission’s ineffectiveness in recent years. The Government Accounting Office (GAO), an arm of Congress, issued a report in 2004 that showed that 78 percent of the time, the Joint Commission accreditation processes had not uncovered serious deficiencies that were subsequently found by state agencies. That might be the scariest statistic of all. Massachusetts Public Health Commissioner John Auerbach has stated publicly that DPH inspectors make onsite hospital inspections in only about 12 percent of complaint cases. So this is one iceberg that’s bigger than is generally recognized.

Unfortunately we do not know much yet about DNV Healthcare, Inc. It is a privately held company which has operated primarily abroad. It is a division of DNV, an indepen- DNV: The first new player in hospital accreditation in 30 years dent foundation “dedicated to safeguarding life, property and the environment.” It has 300 offices in 100 countries.

DNV’s accreditation program is called NIAHO (National Integrated Accreditation for Healthcare Organizations). DNV uses the “ISO 9001 Quality Management System,” a generic standard applicable to any manufacturing or service industry. It was created by the International Organization for Standardization (ISO) with the objective of setting international requirements for quality management systems. Its premise is “continual quality improvement” and it also claims to be less complicated [for hospitals] to administer. DNV contends that it looks at all areas in the hospital, not just clinical. It also claims to be built to align with electronic health records.

MNA has asked colleagues in England, Australia and Denmark what they know about DNV, how labor unions fit into the new ISO 9000 model and how the DNV accreditation process compares to the Joint Commission’s, in particular in terms of effectiveness (helping achieve patient safety) and its impact on staff/personnel.

In Denmark we know DNV from the industry, especially off shores and flight industries. In the hospitals we now we are using the Joint Commission (with success) and in the next couple of years the plan is that we will use the Joint Commission together with a Danish system, an ISO-standard system. I have found this on the Web site for DNV in Norway: In 2007 DNV was awarded a five-year contract to survey and assess over 600 hospitals in England on behalf of the UK National Health Service Litigation Authority.

It appears that DNV is just beginning to make inroads into healthcare. We have yet to talk to nurses familiar with DNV in healthcare, even in Europe and Australia. We have heard only about its use by industries such as airlines. So fasten your seatbelts, we may be in for a new rocky ride as this major new player on the healthcare scene begins to introduce international manufacturing standards to healthcare.