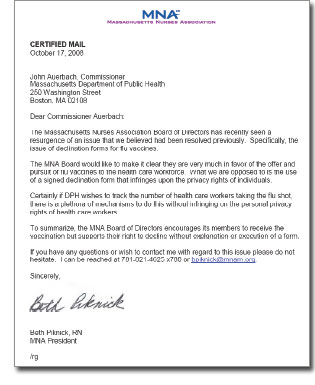 As the flu season approaches, hospitals have stepped up their efforts to vaccinate staff. In so doing, the MNA has received reports from its members that some hospital officials are informing nurses, either in writing or verbally, that the Department of Public Health and/or The Joint Commission requires a signed declination form if you decide not to have the flu vaccine. Some facilities have forms stating you are refusing the vaccine and further requiring you to indicate why you have refused.

We want to make clear that in acute care hospital settings nurses are not required to sign any form regarding your decision to decline the vaccination or to give any rationale either verbally or in writing regarding your decision to decline. At this time, the only exception is at long-term care facilities. While legislation was initiated last year requiring health workers to be vaccinated, the legislation was not passed.

We confirmed with The Joint Commission that signed declination forms for refusal and/or requiring a rationale for refusal are not a condition or standard for hospital accreditation.

The MNA recently sent a letter to DPH Commissioner John Auerbach because of a resurgence of the flu vaccination declination form. The letter was sent in order to ensure that the organization’s position is not misunderstood. While we are very much in favor and encourage MNA members to utilize the available flu vaccine, we also support the right to decline the flu shot without an explanation or written documentation for refusal.

So in short, while MNA encourages members to avail themselves of available flu vaccine, we want to make sure members are fully aware that you are not required to sign any form should you decline nor give any rationale for your decision to decline.