The MNA is proud of the key role we played in the Coalition for our Communities, which decisively defeated Question 1 at the polls on Nov. 4. Question 1 was a reckless proposal that would have eliminated the state income tax and cut the state budget by 40 percent. Passage of Question 1 would have been devastating to every area of health care services, while simultaneously driving up property taxes and devastating our local communities. 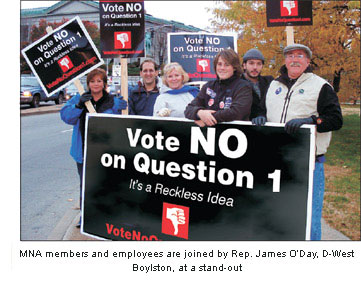 The MNA Board of Directors voted early and unanimously to oppose Question 1, and we participated on the small management group that ran the campaign. In addition, MNA Vice President Donna Kelly-Williams, RN was featured in the critically important closing advertisement of the campaign (go to our website at massnurses. org to see the full ad). MNA members Marie Ritacco, RN and Marlena Pelligrino, RN starred in statewide mail pieces, and MNA members from across the state campaigned against the question. Congratulations to all on this great victory