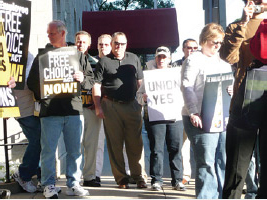 On Aug. 20 labor leaders, union workers and social justice activists participated in a rally outside the Sheraton Commander Hotel in Cambridge to protest a unionbusting seminar being held inside for employers and human resource managers. The rally called attention to the appalling tactics being taught to and used by employers to intimidate and scare workers from forming unions in the workplace.

The rally also called for the passage of important federal legislation known as “The Employee Free Choice Act” (EFCA). EFCA, if passed, would provide for certification of a union by the National Labor Relations Board if a majority (50 percent, plus one) of employees sign authorization cards designating the union as its bargaining representative. Other provisions of the legislation include: establishment of stronger penalties for violating employee rights when workers seek to form a union and during first contract negotiations, providing mediation and arbitration for first contract disputes.

The current system for forming unions is broken. Union busting denies workers the freedom to decide for themselves whether or not to form unions in order to improve working conditions.

The EFCA (H.800, S.1041), supported by a bipartisan coalition in Congress, would level the playing field for workers and would restore workers’ freedom to choose a union free from intimidation and fear.