Nurses across the state have been talking with their colleagues, friends and neighbors about the dangerous proposal to repeal the state income tax, and have signed up many who have pledged to vote against Question 1. But there is still work to do. If you would like to become more involved in the campaign please contact political organizer Riley Ohlson at 781.830.5740 or send an e-mail message to rohlson@mnarn.org.

Why it is Critically Important to Vote NO on QUESTION 1. 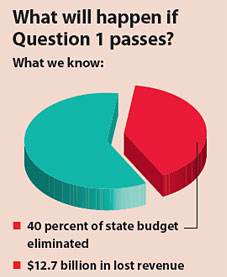 Here’s what we know:

This reckless proposal will:

What to do about it:

Times are hard enough, let’s not make them worse.
Don’t forget to vote on Nov. 4!