“It is hereby declared to be the policy of the United States to eliminate the causes of certain substantial obstructions to the free flow of commerce and to mitigate and eliminate these obstructions when they have occurred by encouraging the practice and procedure of collective bargaining and by protecting the exercise by workers of full freedom of association, self-organization, and designation of representatives of their own choosing, for the purpose of negotiating the terms and conditions of their employment or other mutual aid or protection.” — An excerpt from the National Labor Relations Act

Does anyone feel the current labor environment reflects the language of this federal law? 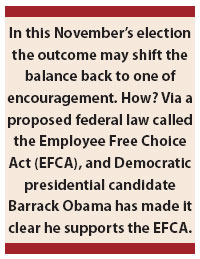 The architects of this law envisioned that labor needed to have a strong and protected voice to provide a system of checks and balances for Capital (i.e., the owners). They envisioned that the workforce, acting collectively in a protected manner under the law, would be the best system to allow labor to negotiate their interests in the employment/market environment.

While the right of health care workers to engage in union-related activities under this federal law came late to the scene in 1974, the premise was the same.

But as the years have passed, this law has been undermined by the shift in the leverage created by a politicized National Labor Relations Board—a board whose policies and processes enhance obstruction rather than “encouragement.”

In this November’s election the outcome may shift the balance back to one of encouragement. How? Via a proposed federal law called the Employee Free Choice Act (EFCA), and Democratic presidential candidate Barrack Obama has made it clear he supports the EFCA.

What would the passage of EFCA do? Its’ passage would enable the United States to align itself with nearly every other democratic industrialized country by allowing its workforce to determine whether or not it wishes to unionize (and with whom) simply by signing a majority of cards indicating that desire.

This is precisely how the workforces in other democratic, industrialized countries organize. Given this significant difference between the U.S. system of labor laws and other countries, we should not then be surprised by the fact that every other country has greater union density than the United States.

The original language of the National Labor Relations Act is good—but the process by which it is implemented needs to reflect that language. Don’t most of us believe that if the process of a “majority card check” under EFCA were implemented, much more of our workforce would elect to unionize? And that if they did—not only in the health care industry but in other industries as well—it could have changed the negligent runaway markets we have recently seen?

While it is now too late to know what impact greater union density may have had on our market stability, we do know that when employees are given the choice without intimidation and obstruction they overwhelmingly vote to unionize. Why shouldn't they? Working in an environment where you are being silenced but held accountable is untenable.

So this November, I would first ask that you make sure you vote. I would then ask you to consider basing your vote, in part, on whether or not the presidential candidate supports allowing the unorganized workforce to have a protected voice in making decisions that affect them in the workplace.

The choice on this is clear, and our future will be far different as a result.