'Final offers' and the duty to bargain

All too often, management likes to stir the pot in contract negotiations by putting their so-called “final offer” on the table. With this type of proposal, the Management team is implying that the bargaining process is at an end. They may even add for effect that the “final offer” has to be accepted and ratified by the membership by a date specific or it is off the table and forever lost. Also, for emphasis they may add a few adjectives such as- “this is our last, best and final offer” in a take-it-or-leave-it tone.

Such a tactic usually occurs towards the later stages of the bargaining process, and is designed to intimidate and threaten the union team into accepting a substandard settlement. Not surprisingly, Management teams view these inflammatory offers with deadlines attached much differently than do the Union committees. They see it as “a useful way to exert pressure on the union to act upon management’s final offer” and a “businesslike way of negotiating”. (Negotiating a Labor Contract : A Management Handbook by Charles Loughran) However, by simply declaring that this is their “final offer” does not in any way absolve management from their legal obligation and duty to bargain. 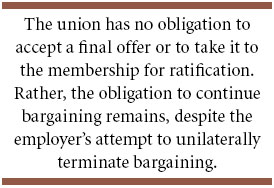 The duty to bargain is set out in the National Labor Relations Act, as well as in the Massachusetts collective bargaining law, Chapter 150 (e). It requires that both parties (the union and the employer) engage in the process of bargaining over mandatory subjects in good faith. This means that there is “…a mutual obligation of the employer and representative of the employees to meet at reasonable times and confer in good faith with respect to wages, hours and other terms and conditions of employment …” (National Labor Relations Act, Sec. 8 (d)). and “The employer and the exclusive representative shall meet at reasonable times, including meetings in advance of the employer’s budget-making process and shall negotiate in good faith with respect to wages, hours, standards or productivity and performance, and any other terms and conditions of employment … (Mass. Chap. 150 (e)).

Neither party may unilaterally or prematurely terminate that bargaining process by declaring that it is at an end. However, an employer’s “final offer” attempts to do just that.

When a “final offer” is put on the table, the union has no obligation to accept it or to take it to the membership for ratification. Rather the obligation to continue bargaining remains, despite the employer’s attempt to unilaterally terminate bargaining. The union team may choose to review the “final offer” simply as one more package proposal and continue the process of bargaining. If the employer refuses to continue bargaining once they have put their “final offer” on the table, they may be in violation of their duty to bargain and an unfair labor practice charge could be filed.

The employer may also be signaling that they believe that a bargaining impasse exists. However, a bargaining impasse exists only if the negotiation process has been exhausted and continued bargaining at that time would most likely not result in an agreement being reached. The NLRB has defined impasse as the point in time of negotiations when the parties are warranted in assuming that further bargaining would be futile. (Pillowtex Corp., 241 NLRB 40, 46 (1979)). Even in the rare instance when a genuine bargaining impasse exists, it does not permanently relieve management from its duty to bargain. The conditions that may have led to impasse are not static and change over time. Therefore, the duty to bargain remains and the union could demand that bargaining resume at a later date.

The use of “final offers” seldom advances the process forward in a positive manner. Rather it is a confrontational and crude scare tactic that often further polarizes the parties. Yet, employers routinely trot this out in a desperate attempt to goad the union committee to cave. Union committees need not take the bait.