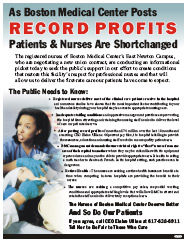 BOSTON—Hundreds of registered nurses from Boston Medical Center’s East Newton Campus conducted an informational picket outside the entrance to the facility today as contract talks continue to stall over inadequate staffing, oppressive management practices and below market wages, issues the nurses believe compromise their ability to recruit and retain staff needed to safely care for patients.

“We are picketing today to seek the public’s support in our effort to create conditions that restore this facility’s respect for professional nurses and that will allow us to deliver the first-rate care our patients have come to expect,” said Ann Driscoll, RN, a nurse at Boston Medical Center and chair of the nurses local bargaining unit of the Massachusetts Nurses Association. “In recent years, changes in administrative practices and the issues in dispute today have led to a dramatic decline in staff morale and the loss of valuable nursing talent. There is more at stake today then a union contract, the quality and safety of patient care at Boston Medical Center is on the line.”

Staffing/Floating Policies at Center of Dispute
The lack of sufficient staff to provide optimum care is at the center of the current contract dispute. To compensate for the lack of staff, the hospital has demanded the unrestricted right to “float” nurses from one area of the medical center to another where they may be unfamiliar with the equipment or procedures and may not be able to provide appropriate care.

“It is akin to asking a math teacher to also teach French. In a hospital setting, such practices can be dangerous,” Driscoll said. “Hospitals are not factories, patients are not widgets and nurses are not interchangeable parts. Management’s floating proposals fail to acknowledge that nursing, like medicine, is highly specialized and no nurse should be forced to care for patients unless he or she is qualified and properly trained to care for those patients.”

Retiree Health Insurance
In addition to staffing improvements, the nurses are seeking a retiree health insurance benefit at a time when competing in-town hospitals are providing the benefit to their nurses. A recent national study by Fidelity Investments found that nearly 70 percent of nurses are concerned that they will need to retiree early due to health issues. “Retiree health insurance is an important benefit for the nursing profession. It was the number one issue identified by our members going into these negotiations,” said Driscoll. “They work at a frantic pace in an intensely stressful and strenuous work environment, and they should be shown the respect of knowing they’ll have this benefit in their retirement. Without this benefit, it is very likely many of BMC’s more experienced RNs will explore options at hospitals where this benefit is offered.”

Wages
The other key issue for the nurses is their desire for a competitive wage scale. The hospital has proposed a wage offer that will leave the nurses salary behind those in other Boston teaching hospitals. In fact, the proposal will leave the majority of the BMC nurses on the Newton Street campus as much as four percent behind their counterparts who work on the Harrison Ave. campus.

The BMC nurses are outraged by the hospital’s lack of effort to negotiate a fair settlement with the nurses in light of the fact that Boston Medical Center is one of the busiest and most profitable hospitals in the state, with state-of-the-art services catering to a patient population with complex needs and who require the most sophisticated nursing care. Boston Medical Center has posted record profits of more than $74 million in the last 18 months and recently awarded CEO Elaine Ullian a 46 percent pay increase.

“Registered nurses deliver most of the clinical care patients receive in the hospital and numerous studies have shown that the most important factor contributing to patients’ health and safety is access to appropriate nursing care,” Driscoll explained. “By shortchanging nurses, this hospital is shortchanging our patients. Our nurses deserve better and so do out patients”

The 600 BMC nurses, who are represented by the Massachusetts Nurses Association, recently filed for mediation in an attempt to break the logjam in negotiations for a new union contract. The first negotiation session with a Federal mediator was held Aug. 18. The parties began negotiations in Dec. 2008 and to date 23 sessions have been held. The contract expired in Feb. 2008 but has been extended through the next session on Aug. 28.