'Talking union': Your rights to speak in the workplace

You got to talk to the workers in the shop with you.

You got to build you a union, got to make it strong…

These are the opening words from a song written in 1941 called “Talking Union” made famous by Pete Seeger. He was singing about forming a union in the workplace. Much has changed since those early days under the National Labor Relations Act (passed in 1935) but the basic rights have survived and remain in place today.

Section 7 of the NLRA grants workers the right to “self-organization, to form, join, or assist labor organizations … and to engage in other concerted activities for the purpose of collective bargaining or other mutual aid or protection …” The NLRA further states that “it is an unfair labor practice for an employer to interfere with, restrain, or coerce employees in the exercise of these rights.”

So what does exercising these rights mean for nurses in the workplace? This column will look at a couple of those rights as they apply to nurses and health care facilities. 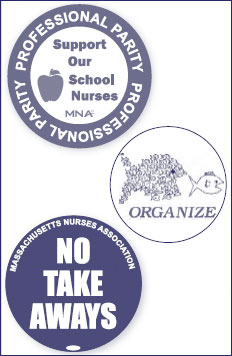 Talking union
Hospitals and health care facilities are much like any other employer in the manner in which they relate to the employee’s union. They feel threatened by the union. Therefore, they want to make it go away and, if not, at least conceal, contain and suppress it as much as possible. That’s why for instance, there is often such employer reluctance to have a union bulletin board in any remotely public space. Hospitals generally have not gotten to the point of feeling comfortable enough with the union so that they can openly recognize the union as, say, some of the auto companies have. Many vehicles have United Auto Workers (UAW) decals on the rear windows of new cars.

Instead, some hospitals today are intentionally trying to confuse and intimidate nurses by forbidding any union talk during work time under the threat of discipline. Nursing supervisors and hospital administrators often inform nurses that they can talk about the union, but only on their own time and/or away from the hospital. Such bans and prohibitions on conversation violate the law—they are illegal!

In addition to controlling the workplace, the employer’s further intent is to portray the union as something sinister and menacing. Therefore, it has to be quarantined, controlled and restricted. That message is not accidental.

The reality is that employees in all professions talk and socialize as they work—from airline pilots, educators, accountants, lawyers and legislators, to surgeons and nurses. People converse about a whole range of issues, including: the weather; family; food; sports; TV shows and movies; accidents and disasters; elections and politics; news stories; celebrity scandals; lottery winners; sales; recipes; and vacations. Such conversation is normal and expected, but in any case it cannot interfere with the performance of one’s work.

Talking about the union and labor issues are also legitimate topics that may be discussed during work time, like any of the above mentioned subjects. The employer is not allowed under the law to limit or forbid such talk any more than they could outlaw talking about the weather.

With that stated, it is clear that a sensible and reasonable exercise of these rights is advisable. For instance, it may be improper and unprofessional for a nurse to talk about a TV show or family vacation while in the middle of patient care. Similarly, it would be inappropriate if such discussion interfered with the performance of their jobs. “Talking union” during work time would be held to that same standard, but not a different or more stringent criterion.

Wearing union buttons
Another sometimes contentious area involves union visibility at work by the wearing of union insignia. Over the years there have been numerous cases decided by the NLRB on the right of employees to wear union insignia and buttons at the worksite. This right was firmly established in 1945 involving Republic Aviation Corp. (Republic Aviation Corp. v NLRB 324 US 793 (1945) – “Employees have a protected Section 7 right to make public their concerns about their employment relation, including a right to wear union insignia at work.”) But this right has been revisited many times by the NLRB, in particular with regard to health care and hospital settings.

Nurses working in a health care location have the same rights to wear union buttons and insignia in general. However, some NLRB decisions have held that in certain “special circumstances” a health care facility may lawfully prohibit the wearing of union buttons in immediate patient care areas, if necessary to avoid the disruption of health care operations or disturbance of patients. But the burden is on the facility to prove these special circumstances.

In other words, for the hospital to restrict the wearing of union insignia, it would have to demonstrate that a nurse wearing a union button or sticker would likely disturb patients and their families because they would reasonably fear that their medical care was unsafe, or that the button or slogan disparaged the hospital and was recklessly made, maliciously false, vulgar or obscene.

The bottom line is that RNs are allowed to wear union buttons, stickers, ribbons and insignia even in patient care areas, potentially limited only by the narrow factors referred to above. The hospital or health care facility cannot simply impose a blanket rule that discriminates against union insignia.