“Maura Healey is a true champion for workers and workers’ families,” said Katie Murphy, ICU RN, and president of the MNA. “The MNA is proud to endorse Maura Healey for Governor because she has always had an open door for frontline healthcare workers. She actively listens to our concerns, empathizes with the challenges we face, and works hard to help nurses and healthcare professionals provide quality care for our patients." 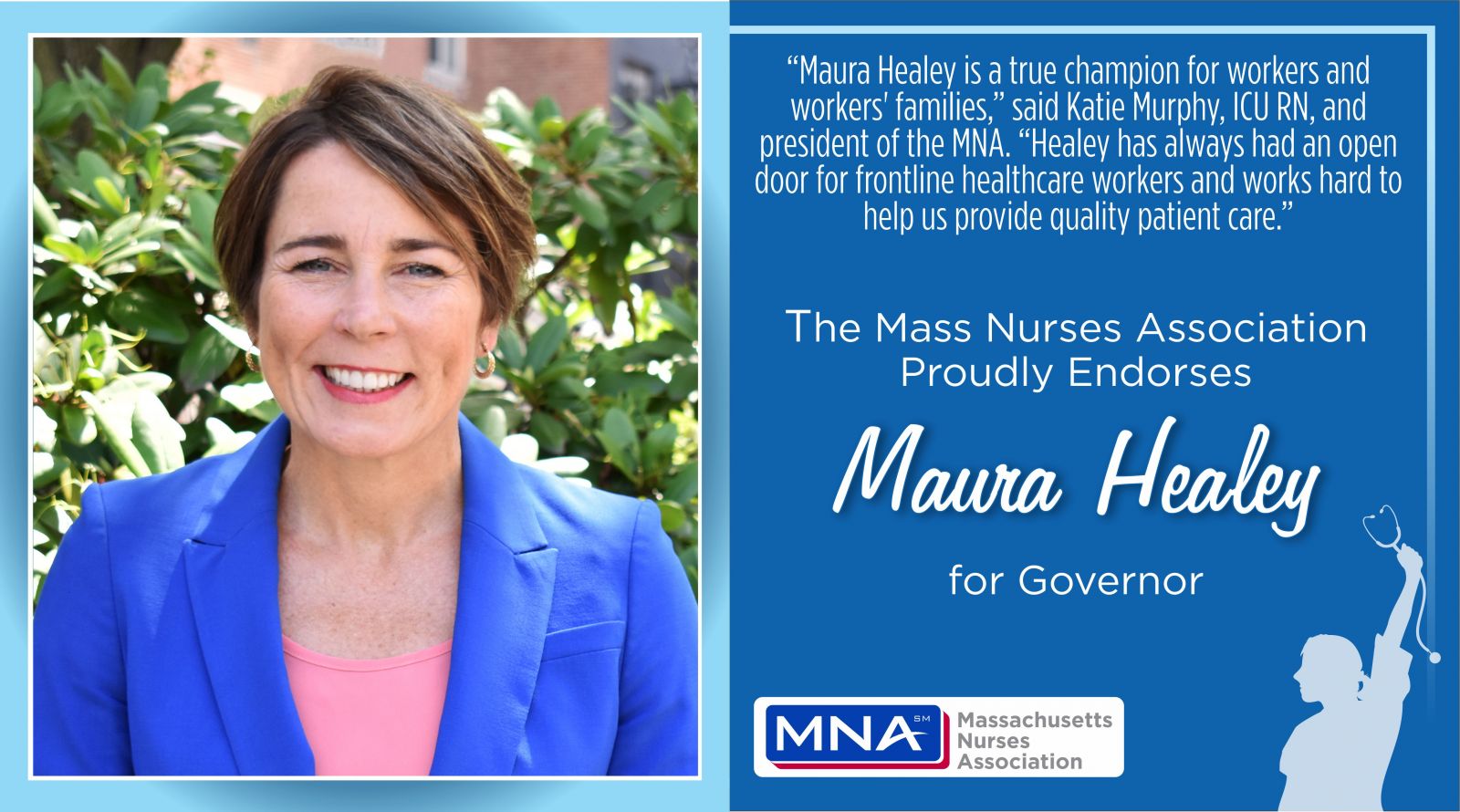 "I am the proud daughter and granddaughter of nurses and their empathy and resilience stay with me to this day,” said Healey. “Nurses show us the meaning of hard work and compassion every day. It is a special honor to have MNA’s endorsement. And I will be a Governor committed to respecting and honoring the tremendous value, capacity and dignity of the work they do.”

Healey, the daughter of a union nurse, has long been a supporter of MNA nurses and healthcare professionals. She was the keynote speaker at the MNA Labor Leader Summit in 2016, was an early and stalwart ally of St. Vincent Hospital nurses during their historic 2021 strike, and as Attorney General has worked closely with the MNA and its members through the Policy & Government Relations Division, the Health Care and Fair Competition Bureau, and the Fair Labor Division on a variety of issues.

As noted in her statement to the MNA about her candidacy for Governor, Healey has a strong record of opposition to hospital consolidation when it would increase costs or compromise quality. She recently released a report on how the proposed Mass General Brigham expansion would drive up costs – an expansion that the MNA also opposed as part of a coalition to protect community care. In addition, Healey opposed the proposed merger between then Partners Healthcare and South Shore Hospital in 2015.

“As Attorney General, Maura Healey has not been afraid to take on tough issues and tough opponents, much like MNA nurses and healthcare professionals,” Murphy said. “Healey stands up for what is right and will bring that same tenacity on behalf of working people to the Office of Governor.”

Healey has also been a powerful advocate for equality, before and during her time as Attorney General. She brought the first successful challenge to the anti-LGBTQ+ Defense of Marriage Act, and has worked to fight bullying in schools, protect women’s rights to accessible, reproductive healthcare, and combat discrimination in lending and housing. Healey has advocated for legislation to protect transgender people from discrimination in public places, a campaign that MNA nurses and healthcare professionals joined as well.

Since its founding in 1903, the MNA has been the most powerful and effective voice on nursing and healthcare in the Commonwealth. The MNA created the Nurse Practice Act, the RN license designation, developed a uniform curriculum for the education of nurses, wrote the first code of ethics for nurses and passed, or helped to pass, nearly every state law governing nursing practice including the law allowing nurses to unionize in Massachusetts.