Making the link on Cape Cod 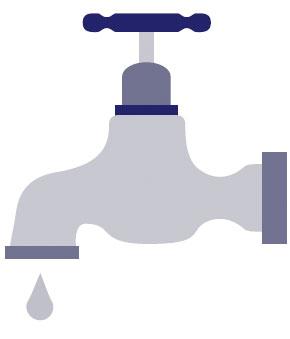 In the 1980s, an unusually high incidence of cancers was observed in the Upper Cape Cod region of Massachusetts. Possible environmental risk factors were identified, including proximity to the Massachusetts Military Reservation, pesticide applications to cranberry bogs and forests, and tetrachloroethylene (also called perchloroethylene, PCE) contamination of drinking water.

The Superfund Basic Research Program (BUSBRP) at the BU School of Public Health decided to focus on PCE, and is using traditional and new tools to continue to test hypotheses concerning associations between PCE contamination and cancers, reproductive disorders and developmental disorders.

PCE solvent exposure linked to increased breast cancer risk
From 1968 through 1980, families in eight Cape Cod towns were exposed to PCE when the solvent leached into drinking water from the inner vinyl lining of certain asbestos cement water distribution pipes. In 1997, Aschengrau initiated a population-based case-control study of 672 people with breast cancer (the cases), and 616 people without the disease (the control group), to investigate the association between PCE exposure from public drinking water and breast cancer.

Aschengrau’s research team estimated the relative delivered dose (RDD) of PCE to which each subject was exposed. The RDD is the amount of PCE that entered a house in drinking water during a specified time period. It is based on a mathematical model for the leaching rate of PCE from the vinyl liner of the water distribution pipes, and takes into account the age of the pipe, its length, diameter and the upstream load. The results of this SBRP-funded study refined and confirmed Aschengrau’s earlier findings that women with the highest PCE exposure levels have a small to moderate increased risk of breast cancer.

More detailed exposure assessment confirms original findings
To control for additional factors, Aschengrau’s research team devised a method to re-evaluate the data. The RDD quantifies the amount of PCE in the drinking water that enters a home, but does not consider exposure from inhalation, dermal absorption, or ingestion. PCE is a volatile organic compound and daily indoor inhalation exposure to contaminated water from showering can be up to six times greater than exposure from ingestion. Using personal exposure variables on tap water consumption and bathing habits obtained from surveys, Aschengrau’s research team constructed a dose model to measure the relative amount of PCE taken in by each participant—referred to as the personal delivered dose (PDD).

Overall, the risks calculated from the PDD analysis differed only slightly from the RDD analysis. The study showed that the impact of variations in personal habits was small in comparison to variations in characteristics of the drinking water distribution system. However, Aschengrau believes that it remains important to assess exposure as accurately as practical in an epidemiological investigation.

Innovative software helps
Aschengrau’s research team has also developed an innovative exposure assessment method to model a town’s entire complex water distribution system. They are using EPANET, an EPA software package that simulates hydraulic and water quality characteristics within pressurized pipe networks. Using the Geographic Information System (GIS) developed for associated studies, they produced digital maps for each study town that identify the subjects’ residences and water pipe network and are now able to calculate the yearly mass of PCE that entered each subject’s residence. This model substantially improves the accuracy of the exposure assessment because it more accurately captures the direction in which the water flows through the distribution system and can assess PCE exposure at residences that are a long distance from the contamination source.

Reproductive, developmental problems
Aschengrau is currently analyzing data from a population-based retrospective cohort study including approximately 2,000 Cape Cod children and their families who were exposed to PCE-contaminated drinking water and a comparable group of 2,000 unexposed children and their families. This study tests the hypothesis that PCE exposure from the public drinking water supplies in Cape Cod is associated with reproductive and developmental outcome such as spontaneous abortion, low birth weight, intrauterine growth retardation, pre-term delivery, congenital malformations, and developmental disorders of learning and attention. The study is able to assess both pre-natal and postnatal exposure among the children and adult exposure among their parents.

Aschengrau’s research has been supported by the Superfund Basic Research Program of the National Institute of Environmental Health Sciences with funds from the U.S. Environmental Protection Agency.

This article is the third in the series “From Research to Real Life” written by Boston University Superfund Basic Research Program (BUSBRP) researchers. GBPSR serves on the community advisory committee of the BUSBRP, which conducts research into the possible reproductive and developmental effects of chlorinated and non-chlorinated organic chemicals and substances (dioxins, PCBs, some solvents).

This research is relevant to the work GBPSR has been doing with Generations at Risk and In Harm’s Way. Included in the BUSBRP are nine projects: A large scale cohort study of perchloroethylene (PCE) exposure in drinking water on Cape Cod, and a related project to develop new methods to locate geographic “hotspots” of increased risk; basic research studies of mechanisms whereby certain chlorinated compounds affect cellular processes associated with reproduction and development, especially as regards interactions with hormone signaling; a field study of reproductive effects in turtles in freshwater ponds impacted by a Superfund site on Cape Cod; and a project to develop new methods of remediation of groundwater.

The community advisory committee aims to provide a basis for a new collaborative structure bridging the university with the community in order to, among other things, increase public awareness about environmental health research, and link members of the professional community with academic environmental health research. For more information on the BUSBRP go to www.busbrp.org. For more information on GBPSR please visit http://psr.igc.org/