Vinyl medical gloves: what are the concerns? 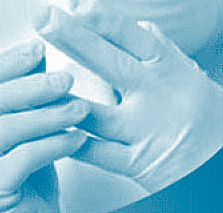 Question: I’m working at a hospital that is searching for an alternative to latex gloves. Vendors are pointing us in the direction of polyvinyl chloride gloves. Is this really an improvement? Any suggestions?

Answer: Vinyl, also referred to as polyvinyl chloride or PVC, is one of the materials commonly used to make examination gloves. Concerns about vinyl exam gloves can reflect three areas of the glove’s life: manufacturing, use and disposal.

While using vinyl gloves, two things to consider include the following:

When gloves are disposed, many end up in waste incinerators. At this stage a concern is that under certain typical incinerator conditions, incineration of PVC can result in the formation of dioxins (the same family of chemicals described above). It is possible to imagine that if vinyl gloves were land-filled, plasticizers could leach out under some conditions, although the Sustainable Hospitals Program (SHP) staff has never seen any studies documenting this.

The SHP has two online fact sheets on Selecting Medical Gloves that outline steps for making an informed choice of gloves. Basically, a facility should define who the glove is protecting, what is being protected against (e.g. blood and body fluids, chemicals, chemotherapy drugs, et cetera), and how long the glove is worn. Once this baseline is defined, the hospital can work with manufacturers or vendors to obtain gloves that have been tested and demonstrated as effective barriers for the specific hazards. You can see the SHP fact sheets on glove selection at the following links:

More information, including references, is also available on the SHP Web site at:
www.sustainablehospitals.org.